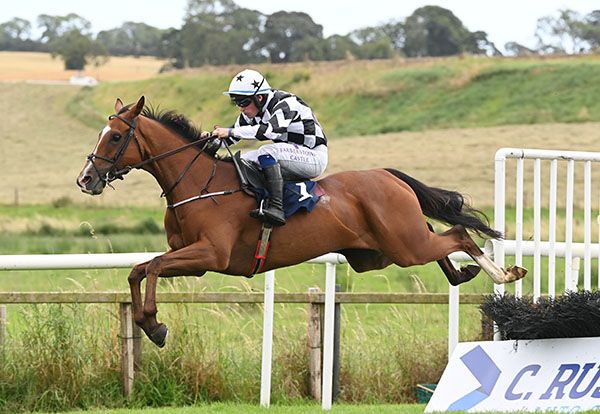 Successful in a point-to-point on debut when in the care of Johnny Berry, the five-year-old was placed on his first two track starts before making the breakthrough in a bumper here last month.

A fine third on his first start over flights at Galway, the son of Leading Light was expected to deliver this afternoon, going off the clear 5/6 favourite from early shows of 13/8.

Sent straight to the front by Simon Torrens, the Derek Kierans owned victor had all his rivals in trouble from two out and kept on strongly up the hill, coming home eleven lengths to the good. Ask Charlie (11/1) finished second under Kieran Buckley for David Harvey, while Joshua Chamberlain (12/1) was a further 24-lengths back in third.

"John said he was well in himself at home and saw this as an opportunity for him so stuck him in," Torrens said.

"The step up in trip was no problem and the only fear I had today was if it was going to come too soon.

"It rode a good race in Galway, for that time of year, and obviously here was a lot weaker but he did it nicely.

"Ben Harvey rode him in his bumpers and he was telling me beforehand that even at home he'll go around like an old pony but as soon as he goes out on to a racetrack he kind of gets lit up. I suppose that's what you want.

"John's not here today, I suppose I'll give him a ring on the way home, but he'll have something mapped out for him."

The Irish Horseracing Regulatory Board Veterinary Officer examined Westcoastinformant trained by Gordon Elliott, at the request of the Stewards and reported the animal to be post race normal.