Robin another for Halley 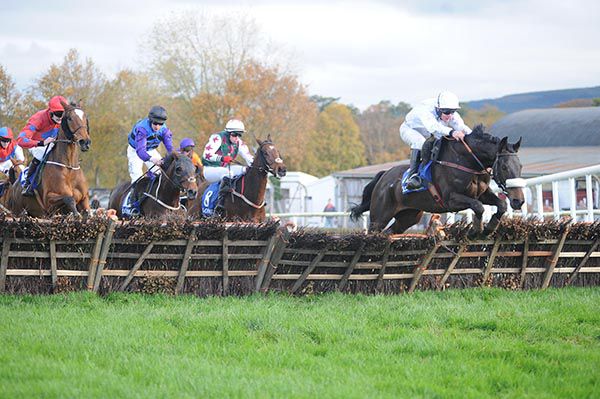 Vincent Halley sent out his third winner in the space of a week, as his Tintown Robin took the Clonmel Handicap Hurdle.

Halley was successful with Carrigready at Thurles last Thursday, while he was also on the mark with Getaway Trump at Lisronagh point-to-point on Saturday.

Tintown Robin was placed on his last two starts, and he was sent off a 9/2 chance this afternoon with Phillip Enright in the saddle for owner/breeder Julia Foran.

Settled in mid-division, the son of Robin Des Pres took closer order approaching the straight, and came with his challenge from two out.

He hit the front before the last, and kept on well under pressure on the run-in to score by four lengths.

Loch Luatha finished second under Daniel Holden for Leslie Young at 14/1, while Muroor (16/1) was half a length back in third with Andrew Lynch in the saddle for Tom McCourt.

Persian Wind was sent off the 10/3 favourite, and he was another half a length back in fourth for Luke and Philip Dempsey.

Halley said afterwards: "He has been running his races all summer and has been second four times, so was entitled to get a win.

"We didn't think it would take him this long to get his first win this season and we'll keep him going as he is handling soft ground better now as he gets stronger.

"I don't think he's an out-and-out winter horse on heavy ground but handles soft and we'll hope to run him in another handicap hurdle next."