Rose makes all under McGill for McNiff 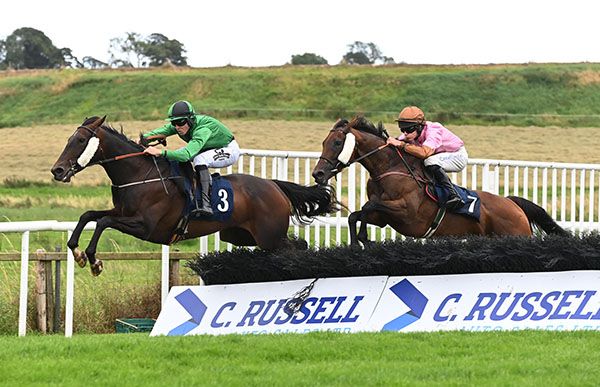 Lighthouse Rose proved tough from the front, as she made all in the Tote Always SP Or Better At Downpatrick Mares Handicap Hurdle.

Successful in this very race two years ago, the Mark McNiff trained seven-year-old was second in last year's renewal.

Owned and bred by Leo Matheson, the Court Cave bay had been out of form of late and was sent off the outsider of the field at 12/1 this afternoon.

Sent straight to the front by amateur rider Oran McGill, the bay victor was pressed before the last and was soon ridden.

She pulled out more on the run-in and came home two and three-parts of a length to the good, from the staying on Aprils Joy (4/1) and Kieran Buckley in second. Motown Maggie (10/3f) was still travelling nicely, just behind the leaders, when she made a bad mistake at the second last, loosing all chance.

"She was good today, she got into a nice rhythm from early on and jumped and travelled. She seems to act around here well," McGill, who was also successful at Sligo on Thursday, said.

"Mark said she loves it around here. I got a handy enough lead and was able to get a couple of nice breathers into her. She loves climbing hills so that makes it a lot easier.

"That's three times she's won here now so she loves it here. Hopefully I can keep things going, if every week was as good as this I'd be very happy."

J.W. Kennedy, rider of Motown Maggie trained by Gordon Elliott, reported to the Clerk of the Scales that his mount made a bad mistake at the second last hurdle.