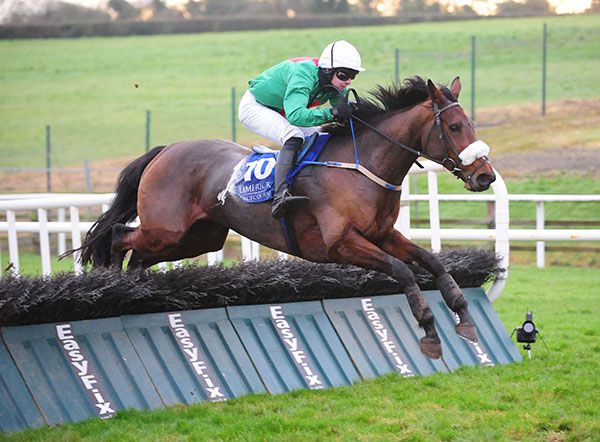 Paul Fahey's charge won at Thurles last Thursday and was carrying a 5lb penalty for that success today.

Sent off the 4/1 favourite she chased the leaders in the early stages before being sent into the lead by the trainer's son Aaron going out on the final circuit.

The Doyen mare was asked for an effort before the second last and soon settled matters, going on to record a five-and-a-half length success.

Oneknightmoreihope came through to take the runner-up spot despite being hampered by a loose bandage on his off hind leg.

"We rode her out on Saturday morning, did a piece of work on Sunday and she was great so we said 'why not'.

"She was immature but is a smashing horse. It is always in the back of your mind to get black-type and if she could sneak into a mares Graded handicap, we could be in business.

"She is a chaser so the choice will now be to either stay hurdling or go chasing. I wouldn't like to go chasing at this time of year, because they are very hot and the owner wanted her as a chaser, so we'll discuss plans and see."