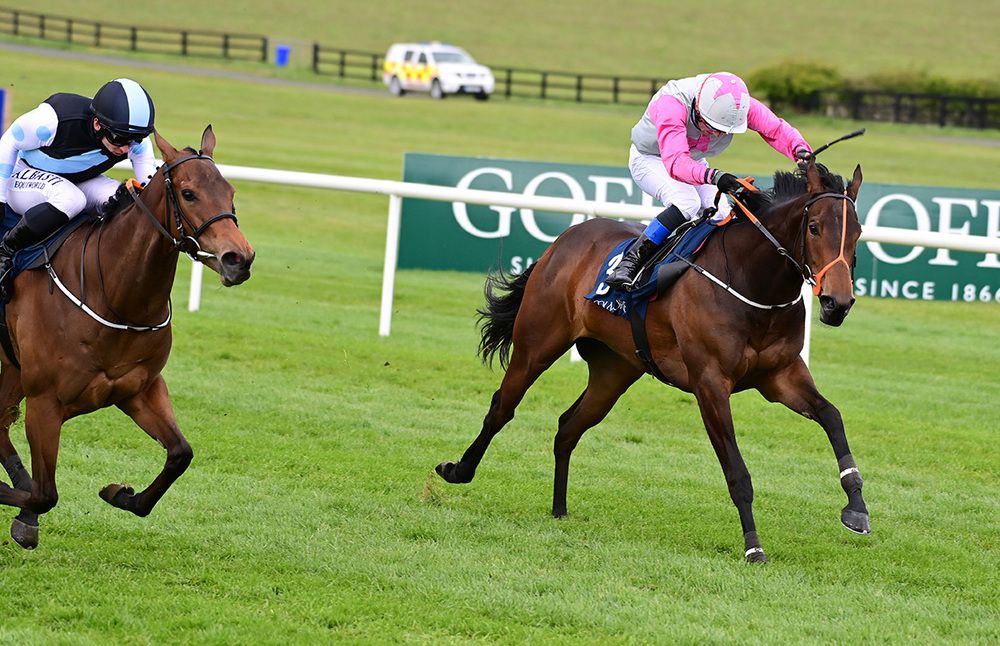 The daughter of Starspangledbanner justified trainer Fozzy Stack’s decision to pitch her in at Group Three level on her racecourse debut as she got the better of several previous winners in impressive fashion.

While her 50-1 success was a surprise to many, Stack revealed it was her exciting homework which prompted him to run her at Pattern level at the first time of asking.

He said: “She’d been working well at home. She hasn’t been away to work or anything and hasn’t even worked on grass, so it was actually a very good performance.

“She’d shown plenty of talent at home. If it hadn’t worked out we’d have been left with egg on our face if she’d run very green, but it worked out well.

Hermana Estrella is likely to run in either the Albany next month or stay at home for the Group Two Airlie Stud Stakes at the Curragh.

“Royal Ascot would be a possibility, or maybe the race on Derby weekend here,” Stack added.

“It will be the Albany or that race, I’d imagine. We’ll take our time and talk to connections and see what everybody wants to do.

“She gets six furlongs well, so the soft ground in Naas might have helped on that front, but I don’t think she needs it soft.

“I’d like to think she could step up in trip for something like the Moyglare later in the season.”

The second split of the Goresbridge Handicap (45-65) saw Devious Dreamer make all the running in the hands of 5lb claimer Luke McAteer.

Moyne trainer Tim Doyle can do little wrong at present and 11/4 joint-favourite Lisabetta was another winner for him in the Goresbridge Handicap (45-65) (DIV I).

The 4/6 favourite Seisai was a comfortable winner of the Bennettsbridge (Fillies) Maiden.

It will be a big day for young rider Ben Coen on Wednesday when he partners Champers Elysees in a field of 13 in the Group 2 Duke of Cambridge Stakes at Royal Ascot.