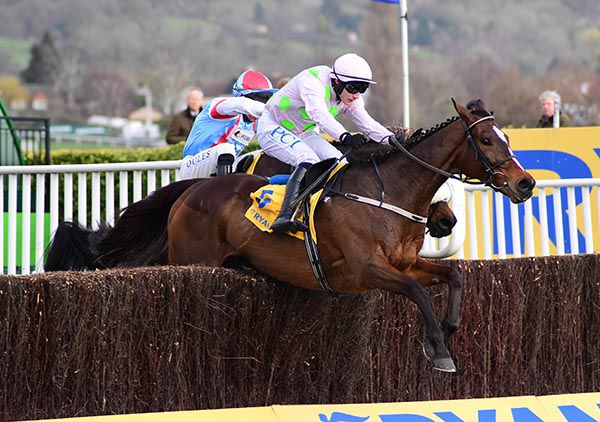 Min was finally a winner in his fourth Cheltenham Festival when grinding out victory in the Ryanair Chase.

Always in the front rank, the Willie Mullins-trained nine-year-old held the late challenge of Saint Calvados to take Grade One honours under Paul Townend.

Min, owned by Rich Ricci, was accompanied by Frodon up front in the early stages until last year’s winner started to lose touch, although he kept going for fourth.

Shattered Love and Aso were others unable to keep pace with Min, who turned up the tempo with Riders Onthe Storm falling three out when trying to get into contention.

A Plus Tard laid it down to Min (2-1) from that point, but the 7-4 favourite could not find what was needed from the final fence.

Saint Calvados was the last to challenge but the post came in time for Min, who crossed the line a neck to the good. A Plus Tard was a length and a half back in third.

Mullins said: “He’s been a super horse for us and it’s great he’s had his day here.

“We used the wrong tactics on him in the Champion Chase last year and it didn’t work out. He likes to be up there, Paul let him do that and here he is again at the top table.

“I was very worried when Saint Calvados came up — we seem to be opening the door up the inside a lot this week! I did get very worried, but he threw a lovely leap at the last and put it to bed. He still had a little bit left in the tank.

“I’m wondering does he just get that trip, is that the extent of his stamina? I think he could come back to two miles, but this seems to be his optimum.”

He added: “It’s important to have winners here, but the horses are running well. We’re just not getting the rub of the green.

“Melon was beaten a nose in the first and Faugheen ran great. They’re all running well, so we just keep our fingers crossed for better luck for the rest of the day and tomorrow.”

On Townend, he said: “He’s very cool. Paul just forgets the last race — his attitude, ‘next race, let’s concentrate on that and not worry about the bad things that happened’.

“He just concentrates on what he has to do.”

Harry Whittington said of Saint Calvados: “I’m so proud of him, I could feel how well he was saddling him and I knew he was going to run a big race. Jamie Neild rides him every day and he said this week he was ready to bring the house down.

“The change in tactics has worked and he’s still unexposed, he can go up in trip again next year. I’m gutted, but so thrilled for the horse.

“Coming to the last I thought we had a chance, but the door was closed on him. It’s fine margins, Gavin (Sheehan) gave him a peach.

Paul Nicholls said of fourth-placed Frodon: “Those two-milers are too sharp for him and Bryony (Frost) said he was flat out all the way, so we will step him back up to three miles.

“If we go to Aintree we will run him over three miles in the Bowl.”