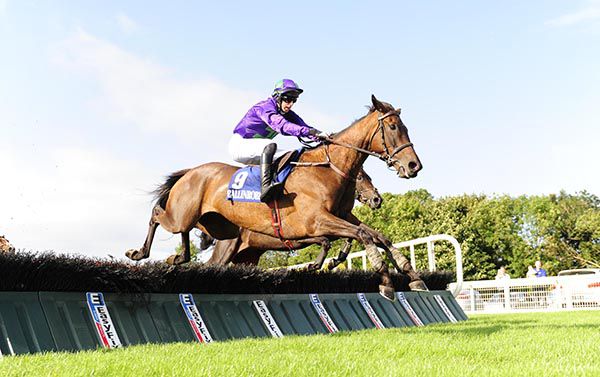 A first time tongue-strap appeared to work the oracle on Clear Left, as she claimed the Believe In Ballinrobe Maiden Hurdle.

A good fifth on debut in November of last year, the daughter of Stowaway failed to make an impact in five starts since and was sent off at 20/1 this evening.

Towards the head of affairs throughout under Paddy Kennedy, the Shane Ryder trained six-year-old was ridden from the last but soon hung left entering the straight.

She was then strongly pressed by Cosmic Rock and Paranoid, but battled on gamely under pressure to see off those rivals by a head and half a length.

Shantou Bay (6s this morning) was returned the 2/1 favourite and she finished fifth.

"She's been very frustrating but we left off the hood and put on the tongue-tie today," said Ryder.

"These races (for horses that have been unplaced up to now) are a great initiative as they give the likes of her a chance.

"Today could have been the end of the road if things didn't happen.

"It's testament to Denis' patience (owner Denis Hannon), as I've been telling him for a long time that I thought she was nice."

* The Irish Horseracing Regulatory Board Veterinary Officer reported to the Stewards that Costly Diamond trained by Patrick G.Kelly was found to have blood on the nose as a result of an exercise-induced pulmonary haemorrhage.

* S.W. Flanagan, rider of Costly Diamond trained by Patrick G.Kelly, reported to the Clerk of Scales that his mount burst.

* The Stewards requested a report from Shane Ryder, trainer as to the apparent improvement in form of Clear Left, placed first, as compared with its recent form. The trainer reported that this filly ran well on her debut in a bumper in Naas. Nothing went right for her in Wexford two starts ago. She has been hooded in all her starts prior to today. After a recent piece of work he felt that the application of a tongue strap may benefit her. She has tended to be a weak sort of filly and he decided to ease off on working her. Having considered the evidence the Stewards noted the explanation offered.

Mr Donal Gavin, (Chairman) absented himself from deliberations on this report from the trainer, with Mr. N.B. Wachman acting as Chairman.