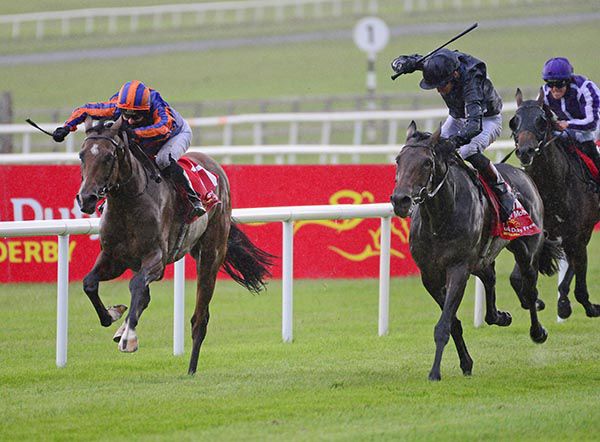 Aidan O'Brien won the Irish Derby for the 14th time as 2/1 favourite Santiago saw it out best from stablemate Tiger Moth.

Indeed, O'Brien saddled the first four home with the 11/1 runner-up and Dawn Patrol third at 10/1. Order Of Australia came in fourth.

Santiago raced towards the rear as Iberia led from Gold Maze, Arthur's Kingdom and Order Of Australia.

The winning of the race came between the three pole and the two pole as Seamie Heffernan delivered his mount between horses.

The pair hit the front at the two and soon took a few lengths out of the pack. Tiger Moth and Emmet McNamara weren't done with, though, as they charged into contention down the outside racing to the final furlong.

They kept coming but Heffernan was on the rail, and had a very willing partner who showed his toughness in fending off the runner-up by a head.

Aidan O'Brien said: "Ascot was his first run of the year and he had a tough enough race over a mile and six. It was a big call and a big worry to run but obviously there is only one Irish Derby.

“We were always going to ride him patiently as that’s the way he has to be ridden. The rain was a big help to him as he handles an ease in the ground.

"I think it was an honest gallop. They ran good races, so I'm delighted.

"Santiago is a lovely, straightforward horse. He likes to take his time in his races and Seamus got a lovely run through and stayed very well.

"We thought he could be a Leger horse, and we were going to look forward to him for next year. He's a lovely, clean winded, honest horse.

“We thought he’d be a lovely Cup horse for next year. If he didn’t come here he might have gone to Goodwood over two miles.

"I think so (go for the St Leger), it looks a lovely race for him. There is a chance he could have a break now and be trained for the St Leger. We have the second and the third there too, so we will see what the lads want to do.

"They are two lovely horses (Tiger Moth and Dawn Patrol) and are two babies. They are progressing. In a month's time they will be even better we think.

"Seamus is a great fella, lot of experience and works hard. We are delighted for him. He knows the horses very well.

"Great credit to everyone for getting it on and getting racing back."

Seamie Heffernan, winning the race for the fourth time, said: "He's a tough horse - a mile and six (when winning the Queen's Vase at Royal Ascot) back to a mile and a half in the Curragh really suited me. I was always comfortable.

"I would have liked to have had a better draw and a cleaner slot, but it worked out.

"It wasn't an ideal draw and I took a gamble in dropping him in, but if you go forward and you get trapped wide he's a horse that gets competitive. He wants to go and race and win.

"We had discussed what was likely to happen, but when the gates open things change so you just have to play it as you get it.

"Turning for home I was tracking Kevin Manning (on Fiscal Rules) and his horse took a bad step maybe two bad steps so I switched out and got a clean run down between them. When I put him in gear he picked up."

In relation to choosing Santiago, he said: "He had been showing plenty at home but what he had been showing at home was guts - you don't have to have the best horse if you have guts. He's a lovely horse with a big heart, you can't ask for anymore."

MV Magnier, representing Coolmore and speaking by Zoom videolink, said: “I’m delighted for Seamus. I didn’t realise that he’s 47, but he’s riding very well and has been working in Ballydoyle for a long time. He deserves it.

“The Irish Derby is the pinnacle of Irish racing. It is a stallion-making race and many great champions have won it over the years.”

Crossfirehurricane's chance went at the gates as he was slowly into stride from a wide draw. It was a similar story for the supplemented New York Girl. Both trailed the field early. Sherpa sustained an injury approaching the home straight and was pulled.

The Stewards interviewed Emmet McNamara, rider of Tiger Moth, concerning his use of the whip in the latter stages of this race. Evidence was heard from the rider concerned. Having viewed a recording of the race and considered the evidence the Stewards were of the opinion that E.J. McNamara was in breach of R10(3)(f) by using his whip with excessive force and R10(3)(g) by using his whip with excessive frequency. Having taken his previous good record into consideration, the Stewards suspended E.J. McNamara for two race days.

Paddy Power & Betfair cut Santiago from 6/1 to 9/4 favourite for the St Leger and introduced Tiger Moth at 8/1 for the race.

Imposing Supreme doubles up for Gibney

The 2/1 favourite Imposing Reserve, who got into the race as third reserve, landed the Ardilaun Hotel Handicap to gain his second win of the Festival.

Malayan (15/2) won the Lord Hemphill Memorial Irish EBF Median Auction Maiden to give Colin Keane his third winner of the week at Galway.

Exciting Real World held in high regard by bin Suroor

Saeed bin Suroor will continue to take small steps up the ladder with Real World — but he believes the potential is there for the son of Dark Angel to reach the top.