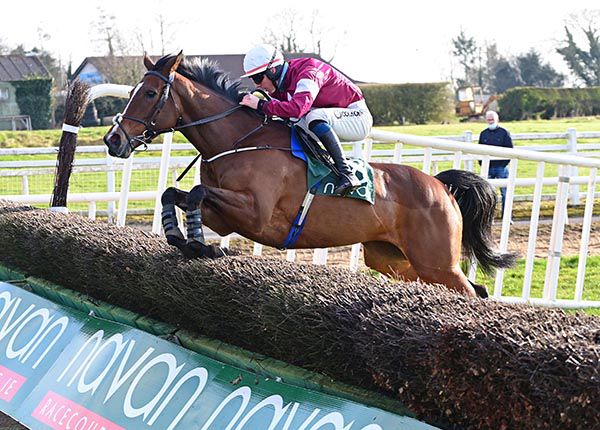 Joseph O’Brien sent out a 1-2 in the featured Flyingbolt Novice Chase at Navan as Scarlet And Dove took full advantage of some misfortune for one of her rivals to readily beat stablemate Sempo.

Scarlet And Dove had just taken a narrow lead over fellow Gigginstown runner Epson Du Houx when the latter stumbled a few strides after the penultimate fence and fell.

The 6/5 favourite was left clear and just had to negotiate the final fence before coming home an easy winner under Donagh Meyler.

Sempo kept on from off the pace in the straight and galloped on nicely on the run-in to get within seven lengths of the winner.

I’m A Game Changer picked up some black type in this Grade 3 event finishing a further seven and a half lengths away in third.

O'Brien's assistant Brendan Powell said, "“It's a nice bit of black-type for her. She's a gorgeous mare, she looks like a gelding as she's nice and big.

“Who knows what would have happened. She got done for a bit of toe turning in there and got close to the third last but she's picked up again and she's galloped.

“We don't know what would have happened last time either. She might have been beaten but she was still galloping.

“On the whole she's actually a beautiful jumper, she can just get a little bit low at one or two. She's getting better all the time.

“She could end up at Fairyhouse or Punchestown. She's got her head in front, and a bit of black-type, which is great.

“With Sempo it's about getting confidence into him. He's the best jumper you'll get, at home, but his first three runs were a disaster.

“He jumped lovely last time and stayed on. I'm sure Joseph will step him up in trip at some stage and he'll be a lovely horse over two-five or even three miles.”