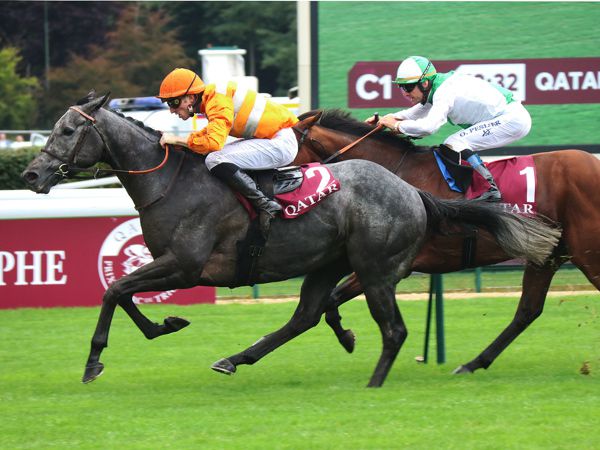 Jerome Reynier’s stable star found only the William Haggas-trained Addeybb too strong on Champions Day at Ascot in October and has returned seemingly better than ever this season.

After winning at Group Three and Group Two level in the spring, Skalleti claimed his first top-level success in the Prix d’Ispahan at ParisLongchamp at the end of May, narrowly beating Charlie Hills’ subsequent Summer Mile scorer Tilsit.

A hot favourite to follow up in Germany, the six-year-old was settled at the rear of the field for much of the 10-furlong contest by veteran French jockey Gerald Mosse.

And while he still a long way behind the pacesetting Tabera rounding the home turn, Skalleti ultimately made up the ground comfortably before powering clear for a dominant success.

Reynier said: “It was a good opportunity to add another Group One to his record. It seemed an easy race for him on paper, but you always worry something might go wrong.

“Gerald was very happy with him. They didn’t go very fast early on and he was out the back, but when he asked him to go he did it well.

“It was not our original plan to run him during the summer because we wanted to avoid all the travel and the firm ground, but this summer is pretty weird as it’s been pretty stormy with a lot of rain — and because the horse was in such good shape we said we had to go.

“To be heading back down south with another Group One victory is great.”

Last season Skalleti won the Prix Dollar just a fortnight before running in the Champion Stakes and his trainer is eyeing a repeat, with a potential run at Deauville next month also under consideration.

“If all goes well, we’ll probably go to the Prix Dollar before going back to Ascot. It worked quite well last year and we hope to win both races this year,” Reynier added.

“The Dollar and the Champion Stakes are only two weeks apart, but so many horses have run well on Arc weekend and then run well again on Champions Day at Ascot. If he’s in great shape and we’re very happy with him, we can give it a go.

“If the ground is too firm in Longchamp, we can skip the Dollar and go straight to the Champion Stakes, but we’ll see in due course.

“He’ll definitely have an entry in the Grand Prix de Deauville at the end of August. I know the trip is a bit longer (extended mile and a half), but it’s a 200,000 euros Group Two — if the ground is soft enough and the horse is in good shape, I’m sure he’d have a great chance.”