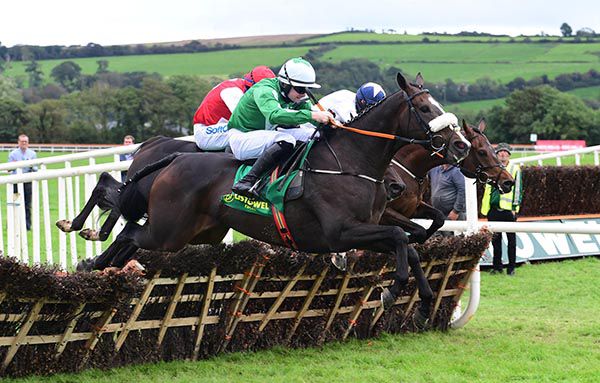 Peter Fahey's Skippin Court took full advantage of Chiricahua's fall at the last to get off the mark in the John Lynch Memorial Maiden Hurdle in Listowel.

The race boiled down to three horses at the second last - 15/8 favourite Chiricahua, who held a narrow lead, Skippin Court, who closed on the outer, and Rodaniche who held every chance in third on the inner.

Chiricahua, a three time Flat winner on hurdling debut, made a mistake at that flight and soon relinquished the lead to Skippin Court.

There was very little between the three horses at the last where Chiricahua made a further mistake and fell. Skippin Court (7/2) was driven out by Kevin Sexton to account for gambled-on Rodaniche (3/1 from 6/1) by a length and three parts. Estepona Sun was 15 lengths adrift in third at 5/1.

Sexton said: "He is fairly consistent and, thinking back, he probably didn't let himself down on the ground in Down Royal, he definitely liked the cut in it today.

"He was very good, very sweet and we went a proper good gallop. I had planned in making the running but Bryan (Cooper, on Chiricahua) went plenty quick enough so I didn't want to cut his throat and ended up sitting in behind.

"The proper run two-miles really suited him and the experience stood to him big-time."

Skippin Court had been placed in three maiden hurdles including when runner-up at Down Royal last month.