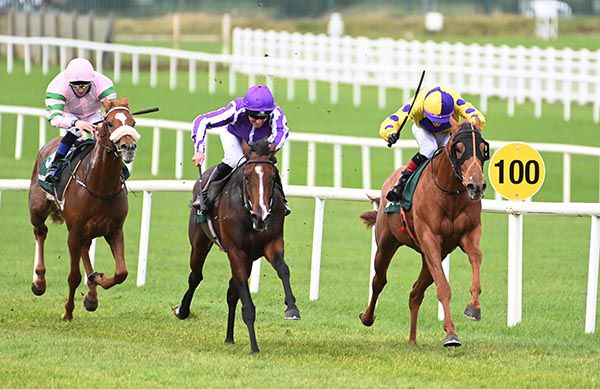 The gelding by Territories was slowly away in his first-time headgear and was one of the first to come off the bridle but, after being switched to race close to the near-side rail over a furlong out, he stayed on well under Andrew Slattery to collar the 11/4f favourite Cyclamen in the final strides.

Half a length was the winner’s margin of victory and he raced from 2lb out of the handicap after finishing fourth on his recent nursery debut.

Winning trainer Andy Slattery said: “I was disappointed with him in Leopardstown. I put a pair of visors on him and I don't think they even really worked today.

“He's very babyish and doesn't travel through a race. Hopefully he'll improve from that, we'll let him off now for the year.

“He gets through that ground, I had him in Galway yesterday but I didn't think the track would suit him given the way he travels. I came here for the better race.

“If he starts to travel a bit better in his races he will go on from here and I'm just putting that down to being babyish, hopefully that's it.”