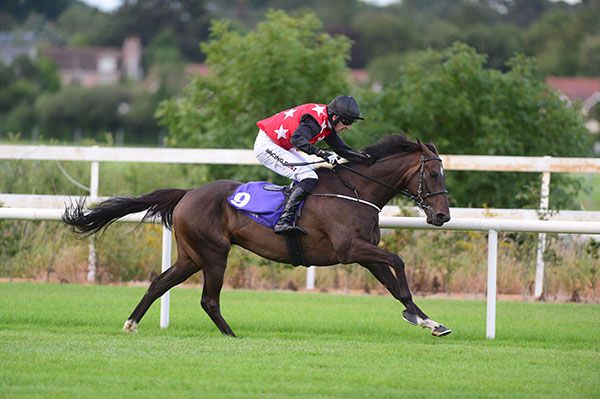 Dual Bumper winner Sneaky Getaway made a successful switch to the flat at Leopardstown today as the Emmet Mullins trained gelding landed the concluding Red Bean Roastery (Q.R.) Maiden in the hands of his jockey cousin Patrick Mullins.

Sneaky Getaway, somewhat appropriately, added tonight's 9.00pm finale to two previous closing race wins and benefited from a cool ride from Patrick Mullins, as he beat Chose Mate by three and a half lengths.

Emmet Mullins later reported “we were glad we had Patrick for a race like that. He wasn’t tied down to any instructions, they went a good gallop and Patrick was confident enough to keep a hold of him and it paid off, as Patrick and Jamie (Codd on Chosen Mate) were the only two travelling off the home bend.

“We’re delighted with that, and he’s won three races now since Easter. He’s achieved a lot more than our wildest dreams.

“He may go to Galway and we’ll see what the (flat) handicapper does with him. I don’t think he’ll go hurdling just yet.”