So Near So Farhh spot on in first handicap hurdle assignment 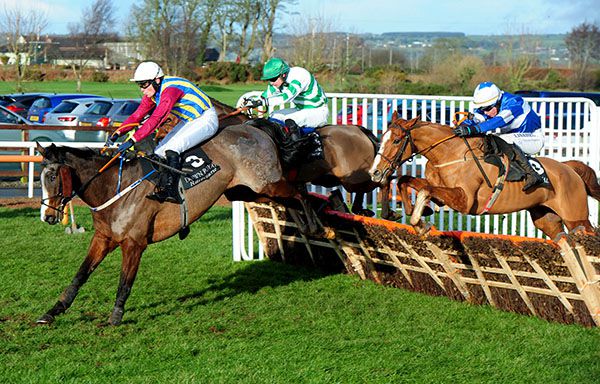 Reine Fee (Danny Hand) leads them over the last but So Near So Farhh (Adam Short, blue and white) prevailed in the end
© Photo Healy Racing

The subject of market support earlier, So Near So Farhh (8s out to 12s) was easier to back on track but she delivered in the Molson Coors Mares Handicap Hurdle at Down Royal for local handler Colin McBratney.

For the second time in succession Reine Fee was narrowly denied, this time by a head, as Adam Short conjured a strong finish out of handicap hurdle first-timer So Near So Farhh.

Owned by James Murdoch, the winning five-year-old was here adding to four Flat successes secured cross-channel in her time with Mick Channon.

"I had to renew the license and I said 'if I don't train a winner before the end of February will they give me it back?!' reflected McBratney.

"I didn't think it would happen that quick. We bought her out of Mick Channon's and we gave her a couple of runs and she was very novicey.

"We didn't know what to expect today, it was her first time in a handicap.

"He gave her a great ride, Adam, and schooled her well. I just told him to hunt away after them at the top of the hill and see what happens.

"She has just started to come to herself the last few weeks. It's great for the owner.

"The long-term plan for her is a mares' hurdle in Ayr in April over three miles."

J.J.Lambe, trainer of Drumconnor Girl, reported to the Stewards' Secretaries that his charge burst a blood vessel during this race

The Irish Horseracing Regulatory Board Veterinary Officer examined Saol Iontach, trained by Gavin Cromwell, at the request of the Stewards and reported the animal to be clinically abnormal post race.