Soviet Pimpernel shows his true worth at Limerick 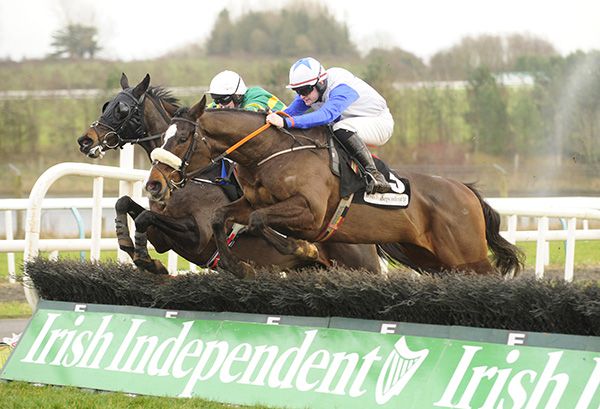 It wasn’t surprising to hear Kevin Sexton say — “We always thought he was a Grade 1 horse and we think the world of him,” after his mount Soviet Pimpernel smoothly did the business in the Grade Three Irish Independent Hurdle at Limerick.

Paddy Power go 50/1 from 100/1 on Soviet Pimpernel for the Supreme Novices’ Hurdle at Cheltenham after the Direct Bloodstock Limited-owned and Peter Fahey-trained youngster quickened smartly down over the final couple of flights to beat Gardens Of Babylon and Global Equity by two and a half lengths and three parts of a length.

“He disappointed the last day but I'd say he was left a bit flat after (his previous run) at Cheltenham. We completely freshened him up since and he is a different horse since,” further reflected Sexton.

"He jumped and travelled and did everything I asked him.

"He got through the ground but would be better on better and you'll see the best of him when he gets good ground. There was a doubt whether we'd run him today but it was the right decision to run although he definitely doesn't want that ground. His class got him through it."

The Irish Horseracing Regulatory Board Veterinary Officer examined Franco De Port (FR), trained by W.P. Mullins, at the request of the Stewards and reported the animal to have sustained a skin wound to the lateral aspect of his left fore cannon otherwise was post race normal.

The Irish Horseracing Regulatory Board Veterinary Officer examined Surin (FR), trained by Gordon Elliott, at the request of the Stewards and reported the animal to be post race normal.