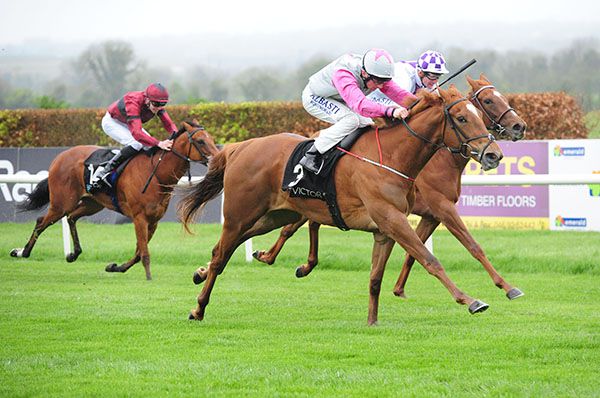 Back To Brussels wins under Chris Hayes
© Photo Healy Racing

Fozzy Stack's Back To Brussels (8s into 6s) got off the mark at the first time of asking in the BetVictor Bet 5 Euros Get 30 Euros Offer Irish EBF Fillies Maiden (Plus 10 Race) at Navan.

Owned by the David Keoghan and Partners Partnership, the chestnut daughter of Starspangledbanner was bred by HRI Chairman Nicky Hartery.

With Chris Hayes up Back To Brussels beat Feminista (3rd on debut at Naas 35 days back) by three parts of a length.

It was two lengths then to the promising joint favourite Between Hills (9/2) in third.

"She has been going nicely at home. She hasn't been away anywhere but she quickened up well and she did it well," said Stack.

"She has plenty of speed, those Starspangledbanners seem to be quick.

"I suppose Naas or the Marble Hill would be the logical place to go with her.

"I have about 30 two-year-olds and they have been running alright so far. We seem to have quite a nice bunch in general. Hopefully there is a couple that might keep us in lights for a little bit!"

The Stewards enquired into an incident in the closing stages of this race involving Allhallowtide, ridden by S.P. Davis and Tinkerbells Effect, ridden by S.M. Crosse where it appeared that Tinkerbells Effect ran short of room on the rails. Evidence was heard from the riders concerned, in the presence of Mr. T.J. Comerford accompanying S.M. Crosse. Having viewed the recording of the race and considered the evidence, the Stewards were satisfied that any incident was accidental in nature and took no further action.