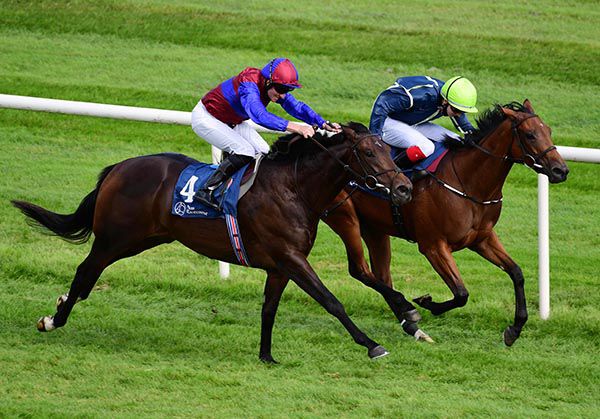 Andy Slattery’s mount was towards the rear in the early stages before making headway on the rail from halfway.

The winner came through a tight enough gap a furlong out and soon led. She was challenged by a much bigger rival in the shape of New York City in the closing stages but kept that one at bay by a head.

The daughter of No Nay Never is a half-sister to nine winners including Middle Park Stakes winner The Last Lion.

Winning trainer Fozzy Stack said: “She ran well the last day in Navan and is probably going to be a sprinter.

“She’s a well-bred filly so it was important to get a win into her.

“There is a Listed race in Dundalk and one in Newmarket at the backend for fillies.

“The mother was placed in the Moyglare and the Cheveley Park and is a half-sister to Tarascon. She’s the last foal out of the mare so she will be kept for the paddocks eventually.

“She showed a good attitude as it got quite tight. She swishes her tail but she does that walking and trotting. It doesn’t seem to bother her.”

Once again nothing from off the pace was able to land a blow against the prominent racers in the Lengthen Your Odds With BetVictor Handicap as Macho Time (10s into 7/1 at the off) came out on top under Shane Kelly.