Stewards have a look but no worries for Insane Bolt 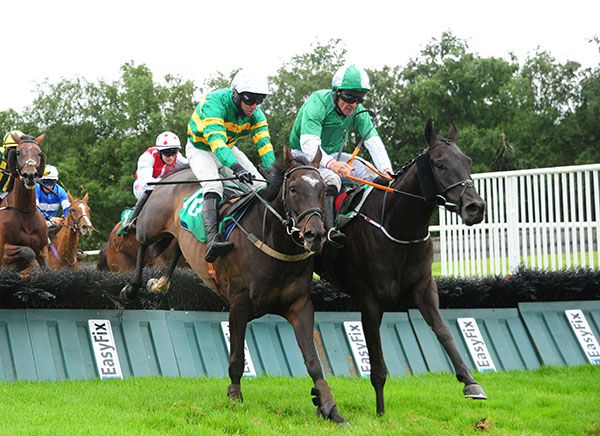 It was second favourite from favourite as Insane Bolt (11/4) got the better of Kilmurry (2/1) before being confirmed victorious in the Randox Health Handicap Hurdle at Downpatrick after a steward’s enquiry.

A winner on the Flat for Johnny Murtagh, the Gordon Elliott-trained Insane Bolt did edge slightly right into Kilmurry on the run-in. He crossed the line half a length to the good in the hands of Davy Russell.

Space was at a premium at the business end here. So Near So Farhh finished well for third, half a length back, and another mare, Saol Iontach, was two and three parts of a length back in third.

The McDonnell’s Bar Racing Syndicate own Insane Bolt and stable representative Ian ‘Busty’ Amond said: “Good friends of ours, Dave and Eric are involved in him, and plenty of the lads from the bar in Newbridge, so they’d have got a good kick out of it.

“It’s a big racing pub so everyone involved would have got a good day out of it.

“We thought he had a good chance. He probably needs to brush up on his jumping. He didn’t win far today and hopefully he won’t go up too much.

“I think he’s run well at Galway before so we could head back there.”