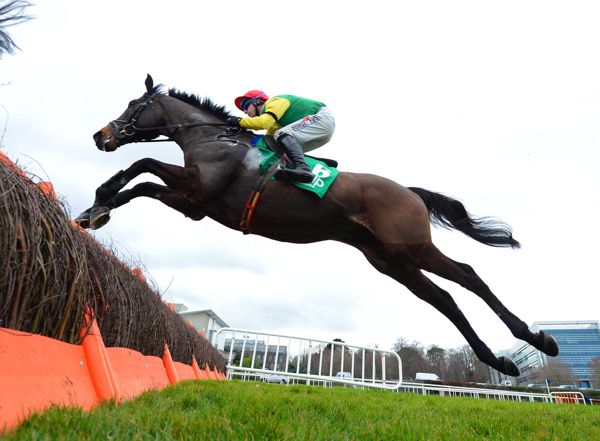 Jessica Harrington's charge lifted the Coral Cup 12 months ago and steps up a mile in distance after producing what was arguably a career-best performance to claim the scalp of Faugheen in the Irish Champion Hurdle at Leopardstown.

Harrington said: "He won't have to make his own running, which is great. He can be dropped in a little bit and he does pick up well.

"I think he does stay three miles, I'm not too worried about that."

Patrick Mullins, assistant to his father, said: "Bacardys has schooled very well over hurdles since falling over fences in Leopardstown over Christmas. His work has been very good. The trip is a bit of an unknown, but I think his style of racing will help him.

"Penhill obviously hasn't run since winning the Albert Bartlett at last year's Festival, but we've been very happy with him at home and although he's a second-season novice, he's actually got a lot of experience, having had nine runs last season.

"The two mares need to show improvement in order to win, but they both stay very well and we're hoping they'll pick up a bit of prize-money."

Jedd O'Keeffe is confident testing conditions will hold no fears for Sam Spinner as he bids to produce a fairytale ending to a remarkable story.

The six-year-old followed up a demolition job in a Haydock handicap by claiming Grade One glory in the Long Walk at Ascot in December, and his trainer has intentionally kept his powder dry for the big meeting since then.

The popular Middleham-based handler, who came close to giving up the game a few years ago after suffering from cancer, has been thrilled with Sam Spinner's preparation.

He said: "Everything is good and the ground is fine for us. We have no worries on that score.

"You've got Yanworth and Supasundae in there, they are probably the two you'd be worried about.

"We couldn't be happier with our horse and we'll see what happens."

His jockey Joe Colliver served almost three months of a 10-month jail sentence in 2016 for lying about the circumstances of a car crash in the early hours of Boxing Day the previous year and paying a friend to take the blame.

Colliver earned plenty of plaudits for his brave front-running ride at Ascot and also feels the possibility of demanding terrain will play to Sam Spinner's strengths.

He said: "If it was on good ground we'd be at the mercy of the speed horses, but on soft ground they still have to prove their stamina and we have no doubts on that front.

"We don't have to make all the running. What we need is just a nice, even pace. If someone else wants to go on, I'm happy to let them. If not, I'm happy to make it."

The New One belatedly makes his first appearance over three miles, having featured in the last four renewals of the Champion Hurdle.

Nigel Twiston-Davies' stable stalwart, who was last seen winning a fourth Champion Hurdle Trial at Haydock, is joined in the field by stablemate Wholestone.

"I expect The New One and Wholestone will dead-heat," joked the Naunton-based trainer.

"I don't know as it is a whole new game for The New One, while Wholestone has done well all season."

Remarking on the fact that this will be The New One's seventh Festival appearance, Twiston-Davies added: "That is quite a statistic and hopefully he will be running there next year, too.

"The New One has been very kind to us. Wholestone is proven at the distance, while The New One isn't, so it is impossible to say which will do better on the day."

The Alan King-trained Yanworth beat Supasundae over three miles at Aintree last spring and makes his first appearance over hurdles since then following a mixed novice campaign over fences.

King said: "I've been very happy with him. He won't mind the ground and he gets the trip so well.

"He has schooled beautifully over hurdles since his last run. It is just up to him now."

Yanworth is one of two runners for owner JP McManus along with Harry Fry's Unowhatimeanharry, who beaten into third place when odds-on for last year's renewal.

"He's a 10-year-old now, so he's up against it, but hopefully he'll run well in what looks an open enough race," said Fry.

McCreery looking forward to the autumn with Up Helly Aa

The regally bred Up Helly Aa will be aimed at some big middle-distance prizes later this year with trainer Willie McCreery reporting the four-year-old to have done very well over the winter.

Patience the main virtue for trainers at present

With the National Hunt campaign ending abruptly and the Flat season waiting to get going, trainers are left in a state of limbo as they come to terms with the reality of dealing with the coronavirus pandemic.