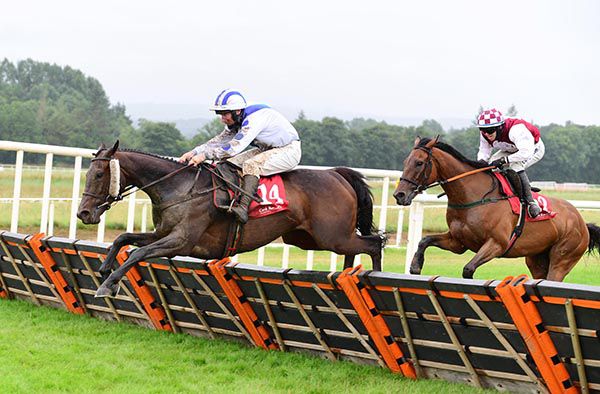 Sweet Sixteen added to a win at Tramore back in April when taking the Kanturk Handicap Hurdle in good style at Cork.

The four-year-old daughter of Maxios attracted a little support from 20/1 into 14/1 just before the off and it proved inspired in this near 2m3f race.

Phillip Enright’s mount challenged early in the straight and took control on the run-in to beat Top Line Tommy, who made a mistake at the last, by three and a half lengths.

Rock On Seamie was a further three and a quarter lengths back in third.

Winning trainer James Dullea said, “I wasn’t sure if she would handle the ground (changed to yielding after earlier rain) but she’s obviously handled it better than I thought she would.

“She’s a grand mare and has been consistent since we got her. I’m delighted for the lads (Seven Heads Group Syndicate, from Barryroe) as they have been unlucky with a few horses before but she’s making up for it now and that’s her second win.

“The fact she’s won on that ground opens up a few more options going into the autumn. Phillip gave her a great ride.”

The Stewards requested a report from James Daniel Dullea, trainer as to the apparent improvement in form of Sweet Sixteen (GER), placed first, as compared with its most recent run at Ballinrobe on the 20/07/21. James Daniel Dullea reported that his charge failed to perform on the tighter track over a slightly shorter distance and the more galloping track and extended distance today help bring about the apparent improvement in form. Having considered the evidence the Stewards noted the explanations given.