Tag, you're 'it' - leaders escape in bumper finale 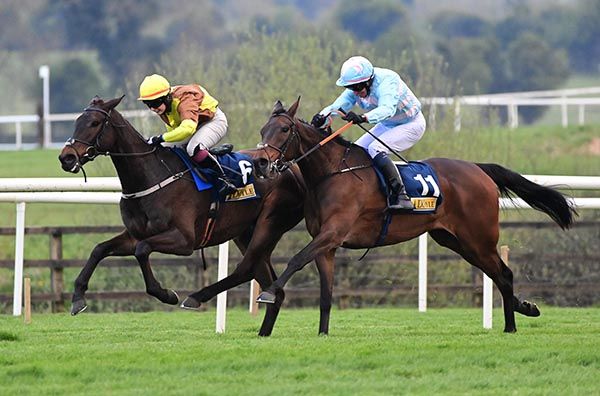 Tag Man (near side) with Sir Argus
© Photo Healy Racing

The pack were well behind with half a mile to race, by which stage Sir Argus and Tag Man were still clear, with Tag Man maintaining his gallop to beat Sir Argus by two and a quarter lengths.

Third-placed Monbeg Park went past James's Gate in the home straight but neither were ever close enough to lay a finger on the leaders.

Winning trainer Henry De Bromhead, earlier successful with Magic Daze, said “I'm delighted with that and mainly delighted for Roger Brookhouse (owner). Roger hasn't been racing for a couple of years and it's brilliant that he's here and great to get a winner for him here.”

He added “we went to buy the horse that beat him (Amarillo Sky), in his point-to-point, but couldn't buy and the next thing he said 'what about this guy' so we got him.”

“He's a real galloping horse and fair play to Davy, he gave him a super ride. He's a key member of our team and I'm delighted for him.”