Tears starts off over flights at Punchestown 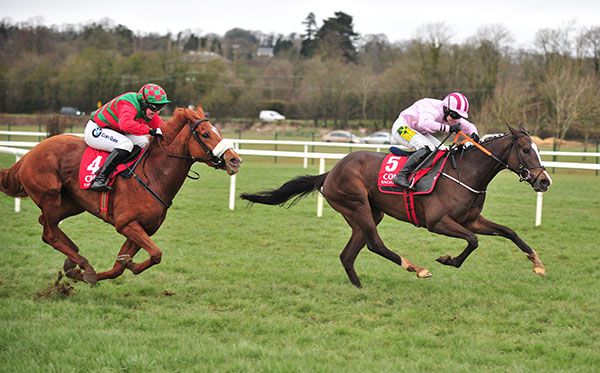 Black Tears will bid to get her career over timber off to the best possible start at Punchestown on Monday, as she lines-up in the Free Trial At racingtv.com/freetrial Mares Maiden Hurdle.

Successful in a bumper at Cork in March, the Gordon Elliott-trained bay finished second on her other three starts, with her most recent effort coming in Grade Three company.

Her biggest danger now appears to be the Willie Mullins-trained French import Elfile.

Twice successful on the level in France, the daughter of Saint Des Saints can be expected to give a good account of herself, with Sunrise Lady and Rhythm Divine others for the shortlist.

This son of Denham Red fell at the first on his debut over flights at Fairyhouse last month, and he is fitted with a hood for the first time now.

He beat French Made in an APQS race on his sole start in France, and that one has since given the form a significant boost by winning at Clonmel .

Christopher Robin and Carlo Biraghi are interesting recruits from the Flat, while Stormy Tale, and the other Mullins representatives, Andalusa and Farid, also warrant respect.

Paul Townend will be aboard Andalusa, and he takes the ride on Thomas O’Malley in the feature race on the card, the Racing TV Novice Handicap Hurdle.

This five-year-old gelding is not without his chance, however British Art is a more obvious contender.

Successful at Down Royal on St Stephen’s Day, the Keith Watson-trained seven-year-old is turned out again quickly after he was narrowly denied at Clonmel on Thursday.

Handicap debutante Dont Go Mad is an interesting runner for Charles Byrnes in this two and a half mile contest, while top-weight Whatsinthecorner is another likely to attract market support.

Dallas Des Pictons and Lighthouse Warrier are stand out names in the Watch Racing TV With Free Trial Now Maiden Hurdle, with preference for the latter who was second at Cork on his most recent outing.

Some interesting newcomers are set to take part in the concluding Irish Stallion Farms EBF Mares INH Flat Race, but the once-raced Fasola Tido might be able to upstage them with Patrick Mullins aboard.