The Rain King enjoys the soft going at Galway 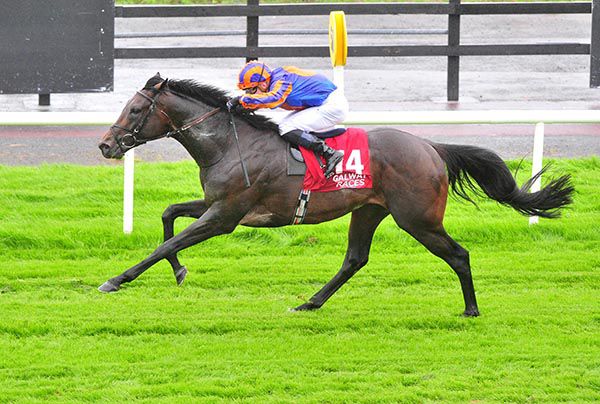 15/8 favourite The Rain King was a decisive winner of the Gloriously Simple With MansionBet Maiden to give 5lbs claimer Gavin Ryan his third winner of the Festival.

The No Nay Never colt came through to launch his challenge off the bend into the straight and he kept on strongly up the hill to beat Roundel by two and three quarter lengths, with the pace-setting Castel Gandolfo back in third.

The winner, unraced at two, had been third on debut at Naas in June before not quite matching that form on his next start at the Curragh.

Winning trainer Donnacha O’Brien said: "He had a good run at Naas but he was a bit disappointing at the Curragh.

“Today was a wonderful opportunity and he done it well.

“He bends his knee so the ground was no harm and it spreads them out in a maiden like that anyway.

“We’ll see what the handicapper does. If he’s too high he could go for a Stakes race.”

A last gasp winner of the final race at Fairyhouse last night, even money favourite Female approach had an easier time of things when turning out again for the 3-y-o handicap over an extended mile and three.

Having finished third behind Arizona Flyer, the winner of the first division, on her previous start at Tramore, Icee M B A (7/1) landed the second split of the Toals Bookmakers (Q.R.) Handicap Hurdle (80-95).