The money comes and Floueur delivers on debut for Elliott 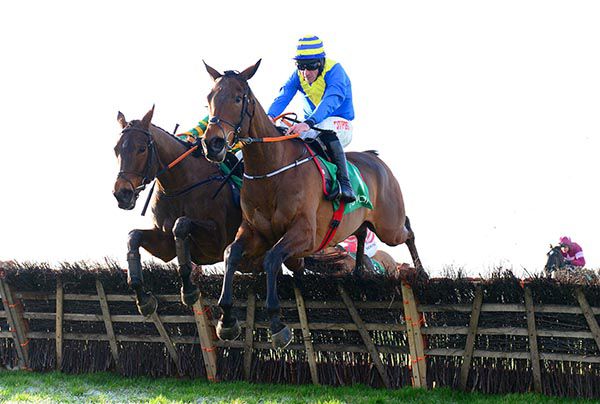 Backed from 12/1 into 4/1 on track, Floueur won on debut for Gordon Elliott in the racingtv.com/freetrial Rated Novice Hurdle at Navan.

This fellow started off with Liz Doyle, finishing third in a Sligo bumper last April.

He then won two races in France for Mikael Mescam (hurdles in October and November) before being picked up by owner/trainer Elliott.

The son of Legolas made it early, and always there or thereabouts, a feature of his win was his mainly slick hurdling under Davy Russell.

A former stable companion at Liz Doyle’s Wexford yard, Cayd Boy, came there with his challenge travelling smoothly in the straight.

However Floueur wasn’t for beating and he eventually scored by two and a quarter lengths.

Elliott also had the third, Tronador, who ended up two lengths back.

"I couldn't believe the price he was and I said it to the boys out on the track," said Elliott.

"He is a nice big galloping horse who doesn't show us much at home but every day we took him away he showed us a nice bit. But at home he just eats and sleeps and is a big laid-back horse.

"Ground-wise it is hard to know what he wants because at home he just does what he has to do. He is a big chaser really and jumped well.

"I'd say he'll be in different colours the next day."