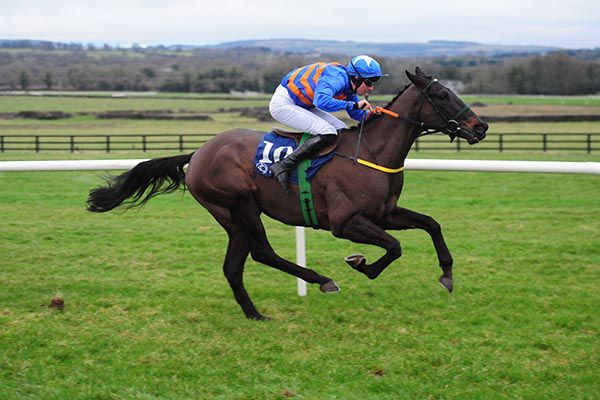 He had five ahead of him in the betting but Thedevilscoachman (10s into 8s) ran out a good winner of the Rushe's Supervalu (Pro/Am) INH Flat Race at Naas.

Eoin Walsh did the steering for his boss, Noel Meade, on the Joe Duke-owned youngster, and the Elusive Pimpernel gelding quickened best from over a furlong out to defeat two of the well-touted market-leaders, Shakespeare’s Word, and The Caretaker, by a length and three parts and a length and a quarter.

“We knew he was nice but with all the talk about everything else it sort of put us off, between Galileos and Dubawis and stuff like that we were starting to get edgy,” said Meade.

“He surprised me a bit how well he quickened up. We had another one coming along and the lads were sort of thinking it's the other one we should have run but we obviously ran the right one.

“He's a nice horse. I was underbidder on him when he was sold as a yearling, Micky Maguire, Jason's father, bought him for Joe Duke that owns him.

“When he was going into training they said they'd send him to me. We had him last spring and did a little bit with him.

“It works out well with those four-year-olds to do a little bit with them in the spring. I'd say he's quite a smart horse.

“He certainly won't be jumping, this spring anyway, so we'll look for another bumper.

“Eoin rides well. He's doing well with what he's getting and he's good value for 7lb.”

Joseph O’Brien sent out a 1-2 in the featured Flyingbolt Novice Chase at Navan as Scarlet And Dove took full advantage of some misfortune for one of her rivals to readily beat stablemate Sempo.

Trainer Emmet Mullins and owner Paul Byrne completed a highly successful few minutes as Noble Yeats quickly followed up the big race success of The Shunter in the bet365 Morebattle Hurdle at Kelso by readily landing the NavanRacecourse.ie Maiden Hurdle.

Rebel Early invariably comes good around this time of the year and recorded her third career win when finishing strongly to land the Athboy Handicap Hurdle at Navan.

Santa Rossa and Manitopark Aa dominated the market for the Racing Again March 13 (Mares) Maiden Hurdle and it was the former that landed the spoils in some style at Navan.