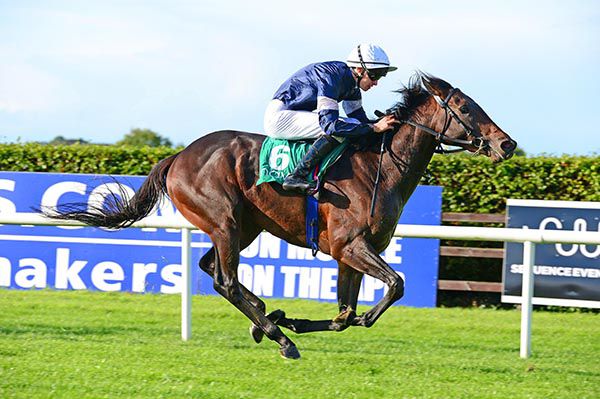 Degraves made it third time lucky in the Welcome To Navan Racecourse Maiden, scoring under Donnacha O'Brien for his brother Joseph.

An eye-catching fourth on debut at the Curragh in August, the son of Camelot since finished third to Sinawaan at the Co Kildare venue.

Sent off a 13/8 joint-favourite this afternoon, the bay colt was settled behind the leaders, taking closer order from early in the straight.

He was pushed along to lead over a furlong from home and kept on well when ridden in the closing stages, going on to prevail by two and a half lengths.

Newcomer Chiricahua (12s in early shows and returned a 13/8 joint-favourite) ran on strongly to take second under Colin Keane for Ger Lyons, while Crassus (8/1) was a short head back in third.

"He did it nicely. The form of his last run worked out really well so he was probably entitled to do that but I think he's a smart horse," said Donnacha O'Brien.

"He had no problem with the ground, he seemed fine on it and galloped through it well.

"I think he'll get a bit further but he's not slow. He quickens well, travelled really smooth, so I think a mile is probably fine for him at the minute."

Closely related to numerous winners, Degraves was bought for 92,000 pounds as a yearling.

With this success, Donnacha O'Brien closed the gap on Colin Keane in the race to be crowned champion jockey, with the score now 95-91.