Time Waits for No one 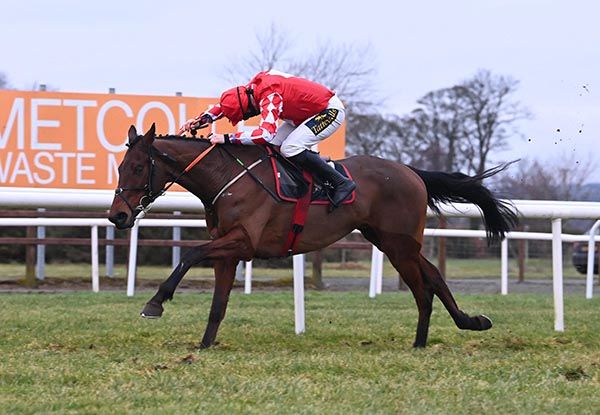 No Time To Wait and Jamie Codd
© Photo Healy Racing

The Gordon Elliott-trained No Time To Wait produced a fine front-running performance to open his account in the concluding bumper at Down Royal.

Jamie Codd bounced out in front on the Walk In The Park gelding and he had his rivals at work running down to the road at the two-furlong marker.

The 6/4 shot was asked to quicken away a furlong-and-a-half from home and the Caldwell Construction-owned gelding stayed on powerfully inside the final furlong to score by 15 lengths. Soldante won the battle for the second ahead of even-money favourite MacDermott

No Time To Wait, a faller on both point-to-point runs, had been third in a Leopardstown bumper on his first outing for the yard over Christmas.

It was a first and last race double for Elliott and the owners, who had scored earlier with Doctor Bravo and the winning trainer said:-

Elliott said: "He's a big galloping horse. A horse for next year, a fine big horse.

"Look he is a horse to go jumping in the future to be honest. He won't jump a hurdle this year, he jumps well at home but is a horse for next year."

Paddy Power made the winner a 10/1 shot for the Champion Bumper at Cheltenham.