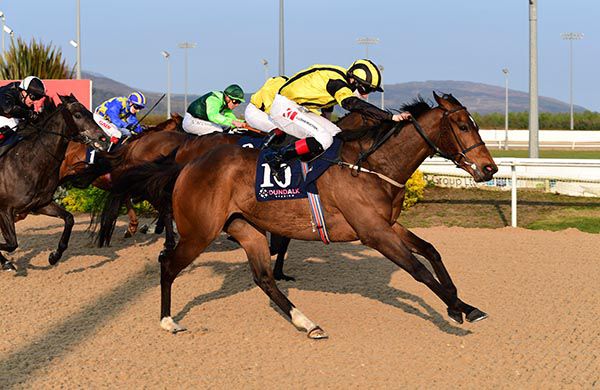 The William Flynn owned and bred 100/30 chance again had Colin Keane in the plate, for trainer Des Donovan.

Tipperary Moon chased the leaders and he was second at halfway.

Pushed along and in front a furlong and a half out, the Sea Moon gelding was soon ridden. He was strongly pressed close home, keeping on well to hold Jm Barrie (briefly short of room two furlongs out) by a neck.

“Colin said he seems to have improved a bit. Hopefully we’ll go on the grass with him now,” said Donovan.

“A bit of nice ground would suit him. Some day he might jump a hurdle for us.”

The Stewards interviewed M.A. Gallagher, rider of Monzoon (GB), concerning his use of the whip in the closing stages of this race. Evidence was heard from the rider concerned who accepted that he was in breach of the regulation and apologised for his actions. Having viewed a recording of the race and considered the evidence the Stewards were satisfied that M. A. Gallagher was in breach of Regulation 10.3.g, excessive frequency. Having considered M. A. Gallagher's record in this regard the Stewards cautioned him on this occasion.