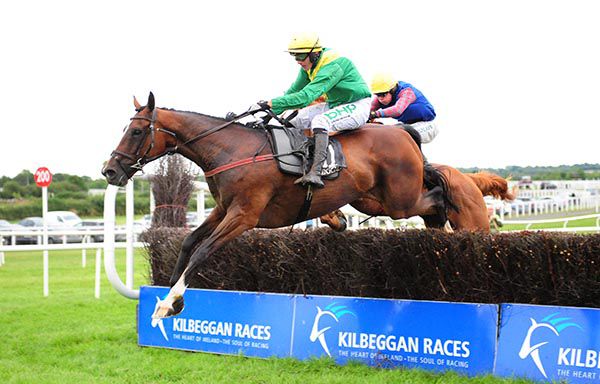 Lasoscar in front at the last
© Photo Healy Racing

Paul Townend was in double-winning form at Kilbeggan as he rode a stealthy race on Liam Cusack's Lasoscar in the featured handicap chase.

The 7-2 favourite crept his way into contention over this extended two mile three trip and came through to collar I'm An Izz Wizz at the last.

He then forged on to prevail by two and three quarter lengths from I'm An Izz Whizz at 25/1. Templemore Dream was a further six lengths away in third at 7/1.

Paul Townend, who missed his ride in the opener on Kolombus, said: "Danny's (Mullins) car broke down and I had to ring my girlfriend to come and pick us up. It's a pity she couldn't get there a bit quicker but alls well that ends well."

Liam Cusack said: "He has been very consistent. He is a very honest, genuine horse. He never runs a bad race. He was in that race nicely off his mark today.

"I was a bit worried that it was a tad short for him. They went very quick and going out on the last circuit he was being niggled along. I thought 'we need to get every jump here' and in fairness he did.

"It ended up being a staying race and he just outstayed them. It's great for his owner Johnny Kavanagh who is a local man and it's a nice pot to win.

"I've no real plan for him now. I was kind of seeing how today went. We'll see what the handicapper does and that'll make my mind up. I won't be rushing him back."