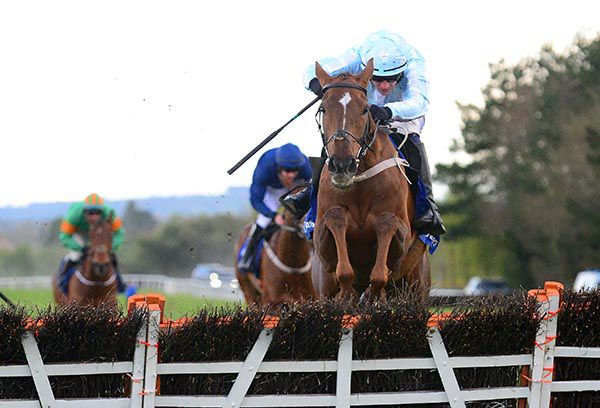 Unplaced at last month's Cheltenham festival, Gauloise today stepped forward with a 10 lengths defeat of Global Equity, taking Townend to within one success of a third career century of seasonal winners.

Mullins spends most of the time in Punchestown's winners' enclosure and following a fourth winner of the day stated “she was very good. I was disappointed with her in Cheltenham and I've been expecting a performance like that out of her all year.

“I think I probably wasn't hard enough on her. I was quite hard on her coming here and it seems to have paid off.

“She's a tough mare and is probably tougher than a lot of mares. I think she's going to improve away next season.

“I thought early on in her career she could be top class and now I think she's back on track again.

“I'm delighted for Kenny Alexander and she's another nice mare to add to his portfolio.

“I'd say she's crying out for another half mile. That was a searching pace there and Paul wasn't going to let the one in front away.

“Even when she looked outbattled at the second last she came out around then. Paul thought she was idling going to the last and she ducked out to the right, which she's done before when she's hit the front, but that's a sign that there is plenty left in the tank.”