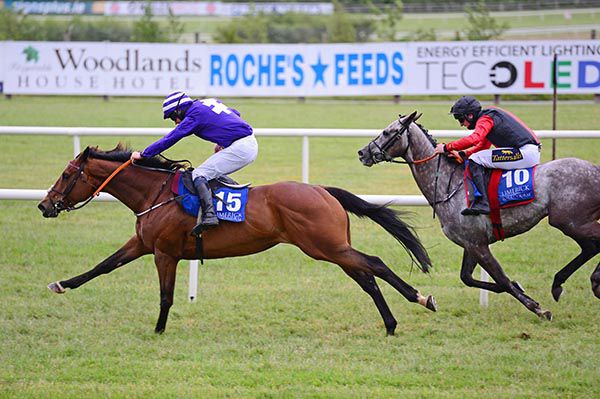 Punters sent Jawbox off the 11/10 favourite and he got a dream run up the inner to assume the lead two furlongs out.

Jamie Codd sent him about his business along the rail and the pair looked to be in charge.

Train Hill was starting to motor on the outside, however, and was ridden by David Roche to chase Jawbox down in the final furlong.

Jawbox stuck to his task but Train Hill really knuckled down and grabbed him in the closing stages to score by a length and a quarter at 9/1. There was plenty of money around for him as he opened at 16s. Blackpoint picked up third-place money at 12/1 a further five and a half lengths adrift.

David Roche said: "My father (John) bred him and broke him and did the whole lot with him. For him to win, for mum (Ann) and dad, is brilliant.

"He's grand but he'll improve a good bit for it too."

Regarding a possible future sale, he added: "I'd take watch and all!

"He is really good to jump; I was going to run him in a point-to-point in the spring and he'd go on most grounds, but doesn't want really heavy stuff."