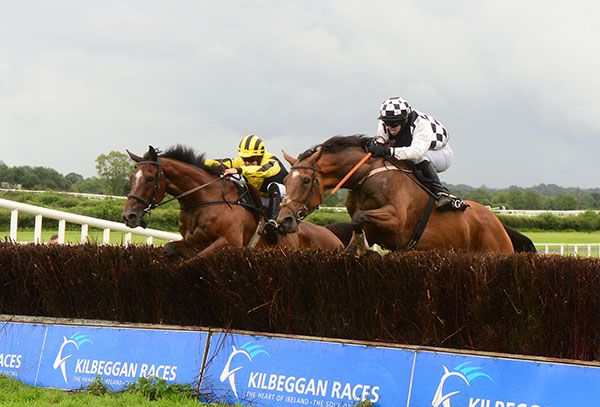 The concluding Follow Kilbeggan On Facebook Handicap Chase produced a thrilling finish with just over a length covering the first five home.

On a day of big-priced winners at the midlands venue, Garrai Phaidin was another in that category as he led before the last and held on by a head from 85/40 favourite Artic Light.

The runner-up came from well back in the field and flew home down the inner but needed another stride to get there, while Maureen’s Star was only a further short head away in third.

It was a fortuitous winning spare ride for 3lbs claimer Ryan Treacy, completing a 398/1 double after Rueben James’ win at 20/1 in the preceding contest.

Paddy Kennedy had been jocked up originally but was unable to take the ride. Then initial replacement Keith Donoghue, having had a double himself at the track earlier in the afternoon, stood himself down before the last and Treacy grasped his opportunity.

The Shane Ryder-trained winner was registering a second career win at the age of eleven, having won a handicap chase at Thurles in 2016.

Treacy said afterwards: “That was brilliant and it was a spare. I have to thank Keith Donoghue for getting me the ride. He’s a bit sore after a few falls but ok thank God.

“It was a great spare to get. He jumped well and travelled well. He was a little bit lairy when I hit the back of the last. I was biding my time as much as I could but when the horse came on my outside I had to fire with all I could.

“I was lucky enough to hold on and actually thought I was done. It’s been a great day all round.”