Treble for Mullins as O'Keeffe scores on Braganza 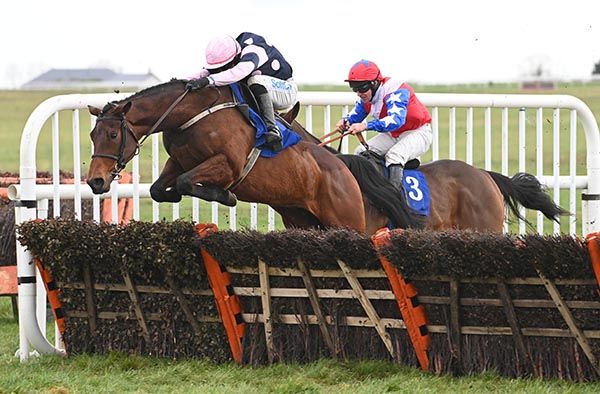 Braganza was a third winner of the afternoon for Willie Mullins when landing the BetVictor Irish EBF Mares Maiden Hurdle.

The daughter of Nathaniel, a half-sister to three winners including this year’s Madrid Handicap victor Amazed By Grace, moved into third place at the second-last and picked up well to lead approaching the final flight. She made a mistake there but was quickly back into her stride and raced clear to beat the 11/8 favourite Monas Melody by six lengths.

The winning 6-year-old had one unplaced run as a juvenile for Ed Dunlop and this was her first time to make the racecourse since then after being acquired for 6,000 Euros (believed to be in foal to Champers Elysees) in November 2018.

She was given an opening quote of 20/1 by Paddy Power for the mares' novice hurdle at Cheltenham.

After Mark Walsh and Brian Hayes had ridden Mullins’ earlier winners, this time it was Sean O’Keeffe on board and he commented: "She has been off for a while but her work at home had been nice. I thought it was a nice performance and she'll learn plenty from it jumping-wise.

"She was bred for the flat and showed a bit of that flat speed down to the last and quickened up well. The ground suited her lovely, it is on the slow side of good and is lovely for her."

O'Keeffe has a high-profile ride for Mullins on Saturday when he partners the well-fancied Ontheropes in the Ladbrokes Trophy at Newbury.