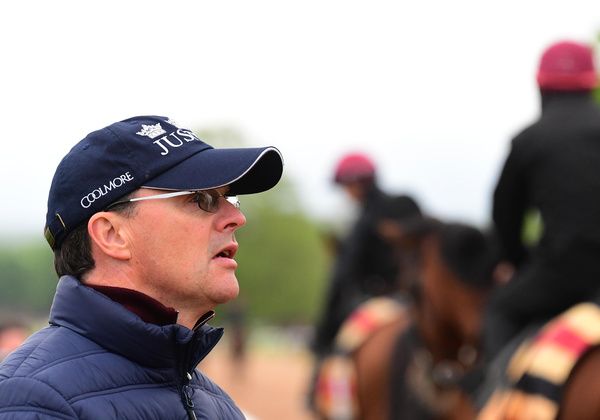 Third in the Newmarket Guineas, the Aidan O’Brien-trained filly looked like coming out on top in the Curragh version before Dermot Weld’s Homeless Songs swooped for what was an impressive victory.

The daughter of Galileo is the general second-favourite for Epsom behind Emily Upjohn, and it appears that is where she will be seen next.

“Tuesday ran a good race and came up against a very good filly on the day. I’d imagine if everything goes well she will head to Epsom,” O’Brien said.

The Ballydoyle trainer was also delighted with High Definition, who produced a career-best in going so close in the Tattersalls Gold Cup.

Making virtually all of the running, the one-time Derby favourite went down by a neck to the William Haggas-trained Alenquer.

O’Brien said: “High Definition ran a great race and it was obviously his best run.

“We were delighted with him and he won’t mind going up in distance.”

Lee gets on scoresheet aboard Leader

Billy Lee finished second three times before getting his winner aboard Cool Leader in Division ll of the Come Racing To Fairyhouse Next Sunday Handicap at Fairyhouse.

Brasil a popular winner for Browne

The Cola Brasil came from an almost impossible position to get up close home to win Division l of the Come Racing To Fairyhouse Next Sunday Handicap at Fairyhouse.

Lexington Dash stepped up on his recent Curragh debut for John McConnell to take the La Bucca Restaurants Handicap at Fairyhouse.

Hotrocket justified favouritism in emphatic style when quickening up impressively to win the Irish Stallion Farms EBF Maiden at Fairyhouse.