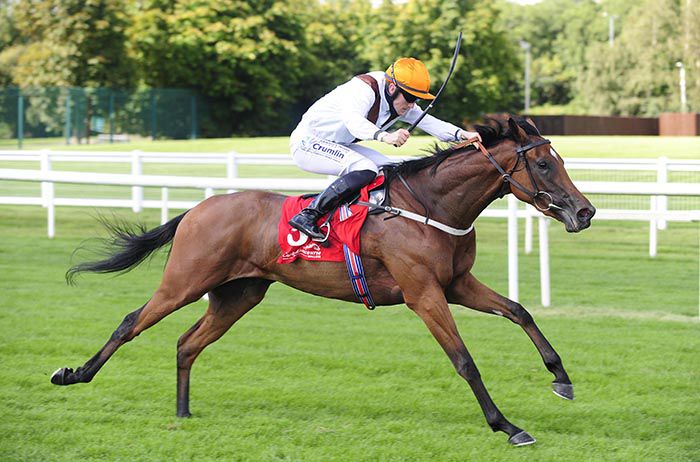 After successive Group Three wins at Fairyhouse and Tipperary, Paddy Twomey’s filly stepped up to Group One level for the first time on Saturday — and ran an excellent race to finish a neck behind No Speak Alexander, and just over a length ahead of Mother Earth.

Pearls Galore is entered in the Kingdom Of Bahrain Sun Chariot Stakes at Newmarket on October 2, but is more likely to be seen in action at ParisLongchamp the following afternoon.

Twomey said: “I was delighted with her. She hasn’t put a foot wrong all year.

“I’d say the plan is to go for the Foret in France, as long as the ground isn’t too soft.

The Cashel-based trainer had just three runners across Irish Champions Weekend — with Limiti Di Greccio beaten just half a length in a Listed event at Leopardstown before La Petite Coco’s short-head victory over Love in Sunday’s Blandford Stakes at the Curragh.

Limiti Di Greccio is entered in the Rockfel Stakes and the Cheveley Park at Newmarket next week, but is set to remain in Ireland.

“She has a couple of entries at Newmarket and is entered in the Boussac in France, but I think she might stay at home,” Twomey added.

“She could go for the Silken Glider (Staffordstown Stud Stakes), which is a Listed race at the Curragh we won with Fantasy Lady last year, or there’s the Weld Park Stakes.

“One of those options might be more where we’ll go, but we haven’t quite decided with her yet.”

Twomey said: “She seems in great form and has come out of the race very well.

“She’s a filly that has progressed all year, so it was great to continue on an upward trajectory.

“Ascot has been the plan from the middle of the season onwards, and that very much remains the case.

“If the ground came up soft, it would inconvenience other horses more than her.”