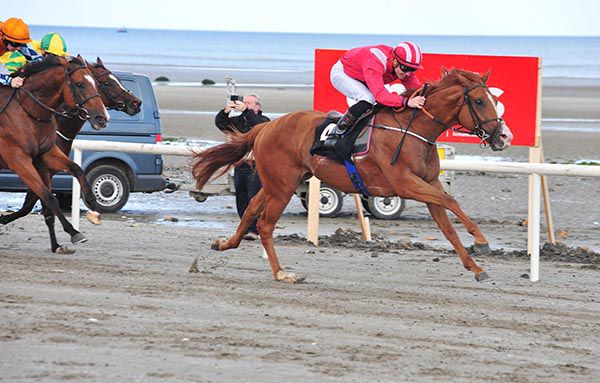 Tyrconnell repeated last year's victory in the Follow @melbourne10racing On Instagram Handicap at Laytown to give Shane Crosse a quick double on the beach.

The Bated Breath gelding had given trainer Sarah Lynam her second winner here 12 months ago and was back in the winners enclosure this afternoon.

Crosse delivered the 9/4 favourite to challenge over a furlong from home and he stayed on best in the closing stages to record a length-and-a-half success in the six furlong contest.

The winning trainer said afterwards:- “Shane said he was travelling real well and he thought he'd angle him out to win like last year.

“I think he just stops a little bit in front but he did it well in the end.

“He likes the sand as well because he's been good at Dundalk.

“It was the plan last year that I wanted to come back and win again so I'm glad it all worked out.

“When he won this race last year it was my second winner, and it was really exciting, so I thought I'd love to try it again.

“He doesn't run too badly on grass but there are just very few options for these horses in 0-65, it's a bit of a joke in all fairness.

“At least this had a small field, usually you are running in 30 runner fields at the Curragh.

“We'll probably aim at a winter campaign, it depends what way the track is riding at Dundalk, but that will be the aim.”