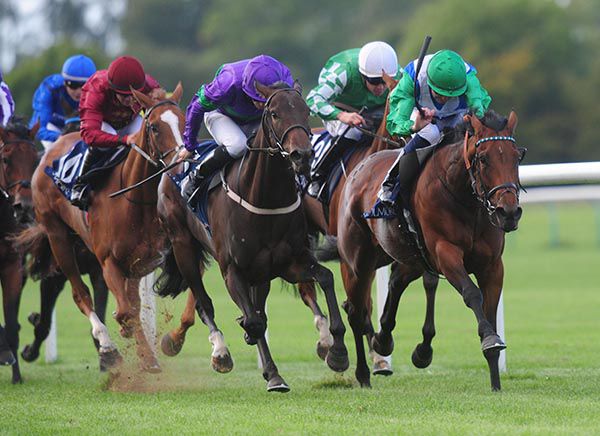 Twice successful last year, the William Haggas trained bay was fourth on her last start in a Group 3 contest at Glorious Goodwood.

Sent off at 9/2 this evening, the daughter of Fastnet Rock raced in mid-division under Colm O'Donoghue.

She took closer order from the two furlong pole, and came with her challenge between horses with a furlong left to race.

The Lael Stable owned victor had a good battle with Dan's Dream inside the final furlong, getting on top in the closing stages, going on to see off that rival by half a length.

The runner-up was returned at 10/1 under Billy Lee for Mick Channon, while 16/1 chance Ship Of Dream was another length and three parts back in third.

I Can Fly was sent off the 2/1 favourite, and she finished fifth.

O'Donoghue said afterwards: "I spoke to James Doyle and Ryan Moore last night and they were very complimentary of the filly.

"They said to ride her cold as she'd finish off the race good and ground and trip wasn't a problem. She hit the line strong."

* D.P. McDonogh, rider of Sorelle Delle Rose trained by D. K. Weld, reported to the Clerk of Scales that he checked his mount in the straight.

* The Stewards enquired into possible interference in the closing stages involving One Master (GB), ridden by C. O'Donoghue, placed first, Dan's Dream (GB), ridden by W.J. Lee, placed second, Lightening Quick (GB), ridden by C.T. Keane, unplaced, Ship Of Dreams, ridden by W.M. Lordan, placed third, Sometimesadiamond, ridden by K.J. Manning, unplaced, Sorelle Delle Rose, ridden by D.P. McDonogh, unplaced and I Can Fly (GB), ridden by D. O'Brien, placed fifth where it appeared some runners met with interference. Evidence was heard from the riders concerned. Having viewed the recording of the race and considered the evidence, the Stewards made no alteration to the Judge's placings. They were, however, of the opinion that W.J. Lee was in breach of Rule 214 in that he had ridden carelessly. Having taken his previous record into consideration, the Stewards cautioned him.

* The Irish Horseracing Regulatory Board Veterinary Officer examined Could It Be Love (USA), trained by A.P.O'Brien, at the request of the Stewards and reported the animal to be lame post race.

An Fearchan had to be re-shod and after a couple of false starts the Listowel Beginners Chase eventually got off nearly ten minutes late. That matters little to backers and connections of Memory Tree who got the job done in the penultimate event.

Chance another juvenile winner for Harrington

Choice And Chance bounced back from a disappointing effort last time to claim the Foran Equine Irish EBF Auction Maiden at Fairyhouse for Jessica Harrington.

Lovely start from Play at The chasing Game

It was going to be either Play The Game (85/40) or Pakens Rock (6/4) from some way out in the John F. McGuire Beginners Chase. Second favourite eventually beat market-leader in the sixth event at Listowel.