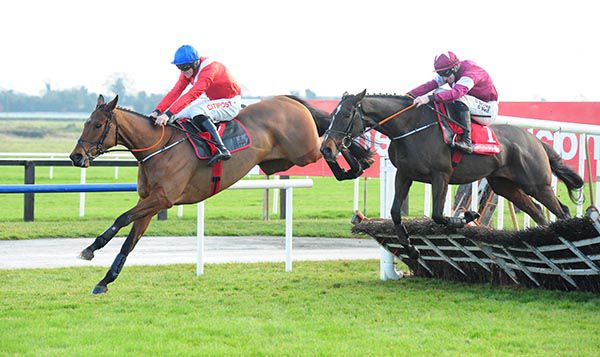 He had to work a bit alright but Grade Ones don’t come easy and Envoi Allen (8/11) remains unbeaten after delighting connections and his many backers in the BARONERACING.COM Royal Bond Novice Hurdle at Fairyhouse.

From the front all eyes were on Davy Russell aboard arguably the most exciting horse in the country.

However some attentions turned to the sweet-travelling Abacadabras, as he moved up in the Gigginstown House Stud silks under Jack Kennedy in the straight.

Envoi Allen found more from before the last though, to defeat Abacadabras and Darver Star by a length and a half and two and a half lengths.

“That’s a relief but they are two very good horses. We like Abacadabras a lot and we think Envoi Allen is the real thing," said Elliott.

“The one thing that could beat him is a slow pace and we had to do all our own donkey work. His jumping was class apart from the last.

“He could step up in trip but I’ll have to talk to Davy and the owners and we’ll make out mind up. He’ll be entered in everything and could run next at Christmas or Naas (Grade 1 Lawlors Novice Hurdle).”

The Stewards enquired into an incident on the approach to the second last involving Abacadabras (FR), ridden by J.W. Kennedy, placed second, Darver Star, ridden by J.M. Moore, placed third and Midnight Run, ridden by Rachael Blackmore, unplaced, where it appeared interference may have occurred. Evidence was heard from the riders concerned. Having viewed the recording of the race and considered the evidence, the Stewards were satisfied that any interference caused was accidental and therefore took no further action.