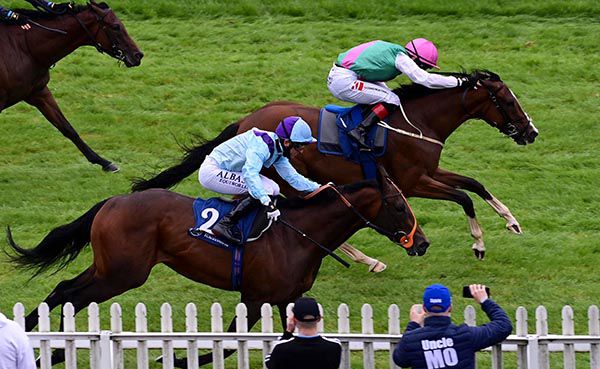 Sacred Bridge confirmed herself to be a top-drawer juvenile when keeping her unbeaten record intact in the €300,000 Irish EBF Ballyhane Stakes (Median Auction Race) in Naas.

Ger Lyons' filly was a warm order at 15/8 to beat her 21 rivals, and looked to have plenty of work to do in pursuit of Hadman who had been ridden to take a few lengths out of the field a furlong and a half out.

The leader edged left and opened the door to the closers approaching the final furlong. Sacred Bridge really found her stride under Colin Keane and was ridden into the lead in the final 100 yards.

British-raider Bosh ran after her but she hit the line half a length clear to the joy of favourite backers. Bosh was well supported this morning and was returned at 4/1. Ultramarine put in good late work for third at 50/1.

Assistant trainer Shane Lyons said: “That was a tough ask with her penalty. Obviously we were attracted by this race with the sponsors, Ballyhane and Joe Foley, and the big pot.

“We're glad it's over. Colin said she's versatile, five or six, and she's getting sharper with her runs.

“She's in all the early closers, all the fancy races, and we'll be campaigning her now in group races.

“It's great to train for these people, the pedigrees are second to none.

“We'll get serious now with the early closers she's in and take it from there.”

Juddmonte filly Sacred Bridge is now three from three having won a fillies' maiden over course and distance in June before following up in Listed company at Tipperary.