Up in trip Colour Sergeant puts deserved win on the board 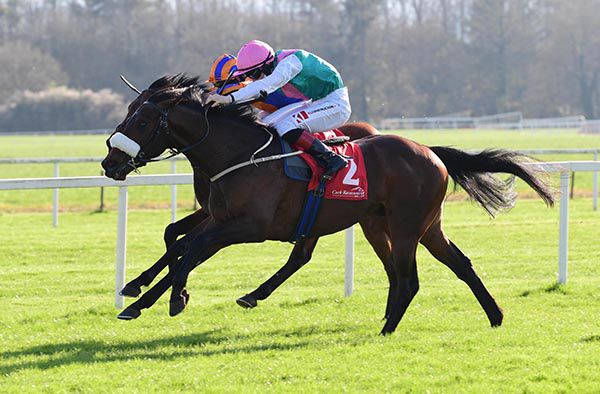 Ger Lyons’ Colour Sergeant, placed on all starts but a beaten market-leader on four occasions too, came good at the 8th time of asking in the Racing Again Tomorrow Maiden at Cork.

Despite the fact that Colour Sergeant was up in trip to this mile and a quarter, it was perhaps understandable that punters sent off Ballydoyle’s Modus Operandi as the favourite.

There was a great dual between the pair in the final quarter mile but Juddmonte’s Colour Sergeant, a half-brother to Triumph Hurdle hero, Quilixios, eventually edged it by a neck in the hands of Colin Keane.

They went six lengths clear of the third, Torino.

"He has been beaten by some very very good horses, his form is in the book and by all accounts he has beaten a good horse (runner-up Modus Operandi) there,” said Glenburnie representative Shane Lyons.

"He is versatile on ground and the further he goes the better he'll be and will get a lot of confidence from that.

"He is a half-brother to (Triumph Hurdle winner) Quilixios and those Juddmonte pedigrees are incredible.

"We'll make a plan from here but the whole idea was for this to happen. This win was all about confidence - the boss man (Ger Lyons) is sick of defending him through the winter!"

At the request of the Stewards, M.A. Enright, rider of Lovely Sheila (USA), trained by John E. Kiely, reported to the Stewards' Secretaries that his mount was green early on, he had nowhere to go in the straight and ran on.

The Stewards enquired into an incident on the turn into the straight involving Hamidabad, ridden by O.J. Orr, and Prince Of Verona (USA), ridden by James J. Doyle, where it appeared Prince Of Verona(USA) had to check. Evidence was heard from the riders concerned. James J. Doyle stated that his mount was a big baby having his third run and just had to check. O.J. Orr stated that his mount was edging in behind the others and went slightly left for a tap down the shoulder. Having viewed the recording of the race and considered the evidence, the Stewards took no further action.

W.J. Lee, rider of Whipsaw trained by Henry de Bromhead, reported to the Clerk of Scales that his mount needed to take a check a furlong down.

The Stewards enquired into an incident in the straight involving Modus Operandi, ridden by J.A. Heffernan, and Whipsaw, ridden by W.J. Lee, where it appeared Whipsaw was forced to check. Evidence was heard from the riders concerned. J.A. Heffernan stated that his mount was having its second run and shifted right under a tap of the whip. W.J. Lee stated that he suffered some interference and had to take evasive action. Having viewed the recording of the race and considered the evidence, the Stewards took no further action.