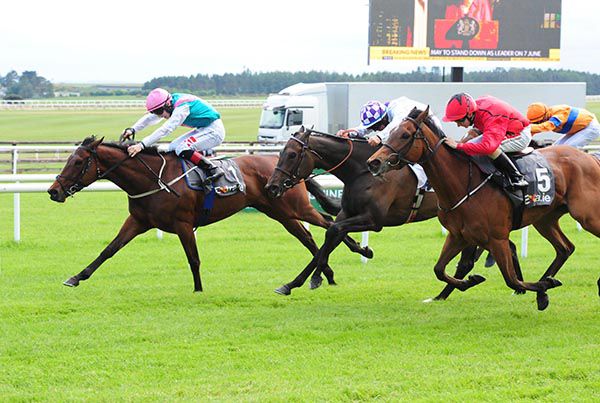 Ger Lyons, Colin Keane and Khalid Abdullah all completed a quick double at the Curragh as Viadera defied top-weight in the Extra.ie Spring Fillies Handicap.

The daughter of Bated Breath showed a liking for the Curragh last year when making a successful debut on Irish Derby day and also gaining black type by virtue of her second in the Group 3 Anglesey Stakes.

The 5/1 chance hit the front two furlongs out in this mile event, and stayed on gamely inside the final furlong to hold Lady Wannabe and Leagan Gaeilge by half a length and a nose.

Lyons said, “I think she has grown, she’s a big filly, the trip was a help and she’ll get further than what I was asking her to do.

“My fillies weren’t right earlier in the season. They weren’t sick but were just not there.

“On that you would like to think there is a Listed race in her and that’s what we will be doing.”

Siskin had initiated a 13/1 plus double for connections when taking the Marble Hill Stakes in impressive fashion.