Waitingfortheday continues on the up and up 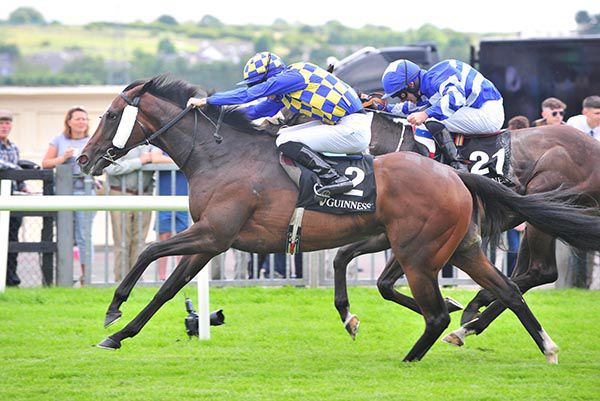 “I had a good draw, she has good gate speed and I got a grand position,” reported champion jockey Donnacha O’Brien after winning the Rockshore Handicap for his brother Joseph on Waitingfortheday at Galway.

“I got there too soon on her and as she’s never going to win too far it’s hard to know how good she is,” further reflected O’Brien after triumphing by half a length on the 7/1 victor.

Emphatic got closest to the John Dollard-owned Waitingfortheday in second place, but the eye was really drawn to Yuften who stayed on well for third place, three parts of a length back.

The favourite Koybig (7s into 5s) was fourth.

"She is improving away all the time and Donnacha gave her a lovely ride and saved all the ground. You can't get there too soon on her but he said he got there sooner than ideal but she is a great filly, she really is," said Donnacha O'Brien.

"We'll try and get some black-type with her now; you have an option of a Cambridgeshire with her but she will be mid 90s after today.

"She was entered in the next race, the Corrib Stakes, but I'm glad we went here."

With a rating of 63 it looked tough for Moonhall Girl in the Irish Stallion Farms EBF Claiming Race. The daughter of Make Believe didn’t know she was a 25/1 shot though, and delivered at Fairyhouse in the hands of Tom Madden.

125/1 winner delights some of the locals at Listowel

When favourite Defan took a nasty fall at the second, the Connolly’s RED MILLS Irish EBF Auction Maiden Hurdle was opened up. At 125/1 Le Figaro Faoudel was the one to grab the opportunity in race two at Listowel.

Felicidad won on her debut for the Gordon Elliott yard in the Irish Stallion Farms EBF Mares Maiden Hurdle at Listowel.

After his early fall at Listowel on Sunday Peregrine Run heads the weights for the Grade A Guinness Kerry National Handicap Chase, highlight of the week at the Harvest Festival on Wednesday.