Walsh may strike again with Punches at Thurles 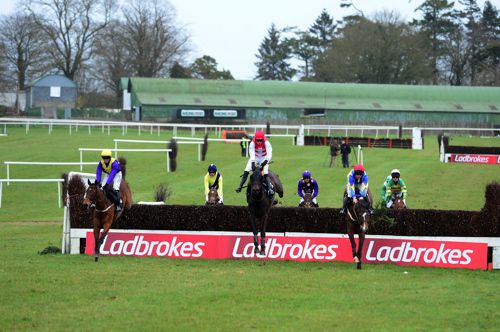 Punches Cross could be another winner for in-form Mark Walsh in the Munster Beginners Steeplechase at Thurles this afternoon.

The jockey, who booted home a treble at Naas on Saturday, is reunited with Joseph O’Brien’s Punches Cross, who can be expected to improve from his fifth place at Downpatrick last month.

The 122-rated Mighty Stowaway is clearly the horse to beat, although his form is on much slower ground.

The connections of Mighty Stowaway, ‘Shark’ Hanlon and Rachael Blackmore, also team up with Whatsinthecorner, who looks to have a solid chance in the Thurles Handicap Steeplechase.

Walsh and O’Brien might land the Cashel Maiden Hurdle with Leave Your Mark who faced a tough task when sixth to Felix Desjy in Galway.

Gordon Elliott operates at a strike rate of over 20 per cent at Thurles, so his newcomer Load Up Time is well worth considering in the www.thurlesraces.ie Maiden Hurdle.

Walkers Point kept the short-priced favourite honest in Wexford last month and ought to be competitive when lining up for the Templemore Handicap Hurdle.

Michael Winters identified this race for Fintown Boy after he won in Fairyhouse during the week and he rates a significant threat.

Rain In Spain makes a quick reappearance in the Urlingford Handicap Hurdle under a 4lb penalty for winning at this track on Thursday.

She won well by three and a half lengths and is sure to be popular as Ricky Doyle’s 5lb claim more than offsets the rise.

Willie Mullins introduces Miss Shoe City in the Go Racing At Thurles Racecourse Flat Race and this should be a good opportunity for her to get off the mark.

Racegoers can avail of free entry to this rescheduled fixture.