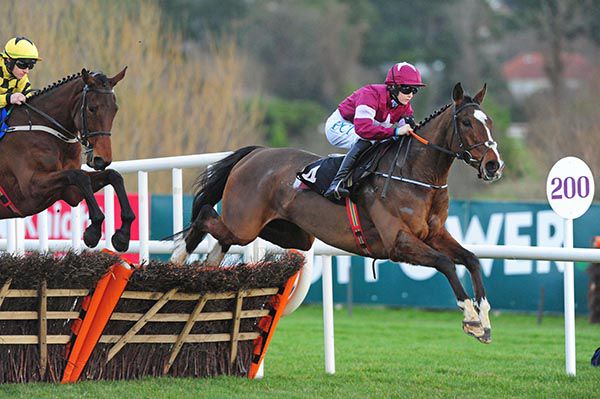 Cobbler's Way got the cleaner jump at the last and powered home on the run-in to grab the spoils in the Pigsback.com Maiden Hurdle at Leopardstown.

The Oscar gelding cut out the running in the two-and-a-half contest but 11/10 favourite The Big Getaway loomed large heading down the final flight.

A blunder at the last put him on the back foot and Cobbler's Way strode on, under Rachael Blackmore, to record a length-and-three-quarter success over the running-on Sempo

The winner had been second to Andy Dufresne on his hurdling debut at Navan last month.

“Rachael got a great jump at the last and I don't think she had quite gone for him yet,” said de Bromhead.

“She said he picked up really well after the last.

“He's always been a horse we've thought a lot of. We were a bit disappointed with him the first day but he seems to have come on a lot for his first run.

“He's one we'll look forward to. We might look at the two-mile-six race for him back here in February.

“I'd to need to speak to Michael and Eddie and see what they'd like to do. Either that or the Surehaul in Clonmel. I think we'll step him up in trip anyway.

“He's a massive big horse and I was surprised when he won his bumper to be honest. He's just a lovely big galloping horse.

“We got him from Colin Bowe. He jumps great and hopefully has a nice future ahead of him.”