Wearapinkribbon makes the most of opportunity 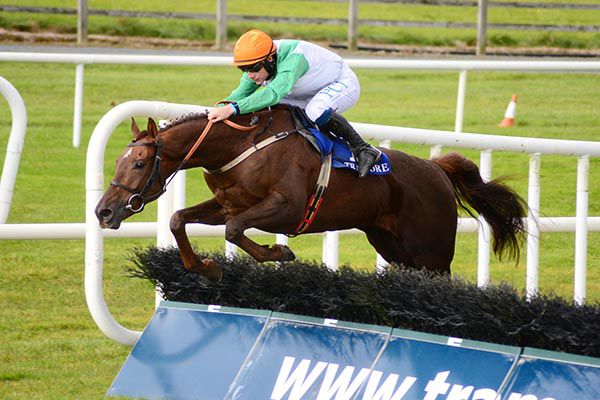 Weareapinkribbon and Paul Townend get over the last
© Photo Healy Racing

Second reserve Wearapinkribbon made the most of his opportunity, as he claimed the Woodstown Maiden Hurdle on his first try over flights.

Third in bumpers at Roscommon and Punchestown respectively, the Willie Mullins trained four-year-old was expected to go a few places better this afternoon and was sent off the 11/10 favourite under Paul Townend.

Settled behind the leaders, the son of Shantou took closer order on the outer from the third last flight and was pushed along to lead at the next.

A sloppy jump at the last did little to stop his momentum, as he went on to register a two and a half-length success.

Flash De Touzaine (22/1) kept on well to take second under James O’Sullivan for Liz Doyle, while For Talks Sake (3/1) was another length and a quarter back in third.

Mullins said afterwards: "Stepping up in trip and jumping helped him today. I know he made a mistake at the last but at home he has been jumping very well. He is a nice jumper and a nice horse that will go up in trip again I think.

"It has taken him a while to learn how to race. In his bumpers he was very green. Hopefully he might improve again to win a novice hurdle or two.

"He is owned by Neville Eager and a few pals of his. He is named in honour of their good friend Breda Miley who had cancer but is well at the moment."