Weather & Stablemate are main threats to Exultant in Sunday's Group 1 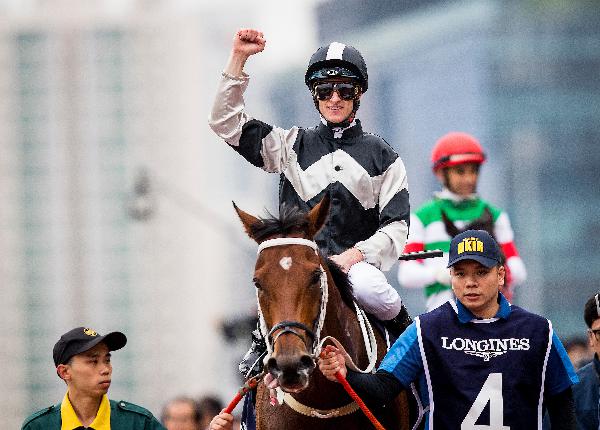 Furore and a storm are Tony Cruz’s two fears as he prepares the Exultant (formerly named Irishcorrespondent when trained in Ireland by Michael Halford) for what he hopes will be another major success in the G1 Standard Chartered Champions & Chater Cup (2400m) at Sha Tin on Sunday, 24 May.

The handler is in the blessed position of also training Furore, the horse he deems to be Exultant’s main rival, but the weather is in the hands of a force far beyond the two-time champion trainer’s control.

“I don't want a downpour, that’s my concern,” Cruz said. “As long as the track is good to firm, as normal, Exultant should win this race again. But I want that normal track!” he said.

Cruz’s wish was not looking good through Friday morning as rain hammered into the turf course and the Hong Kong Observatory had the Saturday outlook as wet. But there is a ray of light for Cruz in a Sunday forecast symbolised by the sun breaking from behind a rain cloud — Sha Tin is famous for ground so permeable as to be sieve-like, which under a hot sub-tropical sun can dry out in the time it takes one set of horses to unsaddle and the next lot to break from the starting gates.

Exultant might not have the ground in his favour but the race’s level-weight conditions are very much on his side as he aims to seal a fifth career Group 1 win following his latest victory in the G1 FWD QEII Cup (2000m) last month. The Irish import’s local rating has him nine points clear of Furore and 11 superior to his other opposing stablemate, the triple G1 winner Time Warp.

Cruz believes Furore can improve on his closing second to the champion stayer in the QEII Cup last start.

“Furore had a little bit of mucus in his throat last time so I think he can run a better race this time. I think he’s the one that could give Exultant a race. Time Warp might not stay this distance but Furore should handle the trip,” he said.

Karis Teetan had the leg-up on Furore in the QEII and is expecting the 2019 BMW Hong Kong Derby (2000m) winner to put in an even better effort than the three-quarter-length second he achieved on that occasion.

“That run was very good and he’s definitely improved since then because I trialled him in between and he felt very good,” he said. “I have big respect for Exultant but Tony tells me he believes Furore will be even better over 2400 metres, so I’m happy with that.”

The rider, a clear third in the premiership with 68 wins, admits that he was surprised when Zac Purton’s mount put daylight on the QEII Cup field with a powerful race-winning move.

“I really thought when Exultant took on Time Warp that he’d definitely come back to me because they went pretty fast from 1100 metres out,” Teetan said. “That should have given me a chance. My horse felt good but I just couldn't catch him; in the straight, he kicked three lengths and that’s his thing, when he gets going he kicks three or four lengths on you and you can’t get to him.

“I’ll definitely make sure that wherever he is, if he’s taking off or whatever he’s doing, I’ll try to track him more closely and see. But, of course, I’m not going to mess my chance — I’ll have him where I think he can win the race but I also know how good Exultant is if he takes off.

And the Mauritian has little concern about the prospect of a wet surface.

“I don’t think it’ll be a problem,” he said. “I trialled him last week on the all-weather and he went nicely and Tony and his team have confidence in how the horses are going.”

Cruz has won six of the last seven editions of the historic contest and is hoping to collect again for a total haul of seven as a trainer — he won it three times as a jockey.

“I think all three of my horses will run big races and it would be nice to get the first three if we could,” he said.

Cruz is in a straight head-to-head with John Moore to decide who will become the first trainer to snare seven wins in Hong Kong’s final G1 of the season. Moore’s four runners are the only opposition to Cruz’s three, making a field of seven.

“If the favourite doesn’t come with his ‘A Game’ at the weekend, we come right there with all guns blazing. It would be great to depart Hong Kong on a Group 1 win and as far as I’m concerned we have a great chance of doing that,” Moore said.

The veteran handler’s long and storied Hong Kong career will close out at the end of this campaign but he hopes to carry off one last major with any one of Savvy Nine, Helene Charisma, Eagle Way or Chefano.

Moore is putting the bulk of his faith in a pair of horses with form on French racecourses, the four-year-old Savvy Nine and the three years older Helene Charisma, a G1 winner at the trip back in 2016 and a known soft ground lover.

“If the pace is genuine, I think Savvy Nine and Helene Charisma would probably be my stable picks and Chefano should like the cut in the ground too. Helene Charisma will definitely enjoy it and Savvy Nine, I can't see any reason why he won't enjoy it — they’ll think they’re back at Longchamp or something!” Moore said.

Joao Moreira partnered Savvy Nine to place second behind the front-running Chefano in the G3 Queen Mother Memorial Cup Handicap (2400m) last time and he wants the rain to keep on falling.

“I think this kind of surface affects probably 65 to 70% of the horses negatively and he’s one of the other 30 or 35% that just gets better on it,” Moreira said.

“He went 2400 metres last time so I’m not worried about the distance — I think he was needing the run last time and now he should be right there. Exultant’s the horse to beat, there’s no doubt about that, but I have to keep the faith and I think my horse has done nothing wrong.”

Moore also had a word or two for the old-timer Eagle Way, third in the QEII Cup but well beaten behind Chefano last time under top-weight.

“We’re going back to set-weights now and it’s a big difference — he was carrying 133lb last start whereas Chefano and Savvy Nine were carrying postage stamps. Off level weights he’d have to be some sort of chance of picking up some really good prize money,” he said.