Weld & Smullen double up with Ashraf 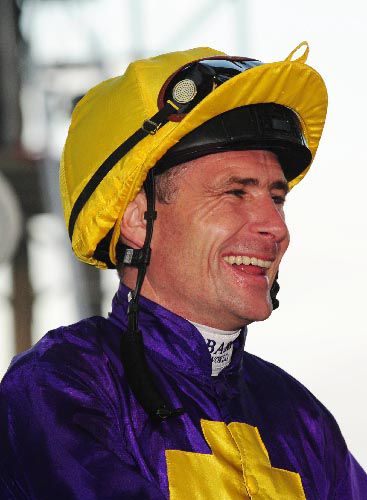 After winning the fifth with Stormfly Dermot Weld and Pat Smullen doubled up in the last, the Irish Stallion Farms EBF Maiden, as Ashraf ran out a comfortable winner in the colours of the Aga Khan.

The bay son of Cape Cross finished fifth on his debut over the course in September of last year and he was sent off a 3/1 chance today.

Prominent throughout he improved into second three furlongs from home and cruised into the lead with over a furlong to race.

He then stretched clear in the closing stages to come home an easy four and three parts of a length winner.

Newcomer Boherbuoy (25/1) finished a good second under Fran Berry for David Wachman while Newberry New (66/1) was a further three parts of a length back in third under Billy Lee for Jessica Harrington.

Jacobean, Ryan Moore for Aidan O'Brien, was sent off the 6/5 favourite but he could only manage a disappointing fourth, a further eleven lengths back.

Dermot Weld said afterwards: "He won nicely and will go for the Ballysax Stakes at Leopardstown. He should make into a nice colt, and I would expect him to be comfortable going a mile and a quarter.

"He was fit and forward, and knew his job. He handles that ground well."