Well Set Up lands the odds in Roscommon 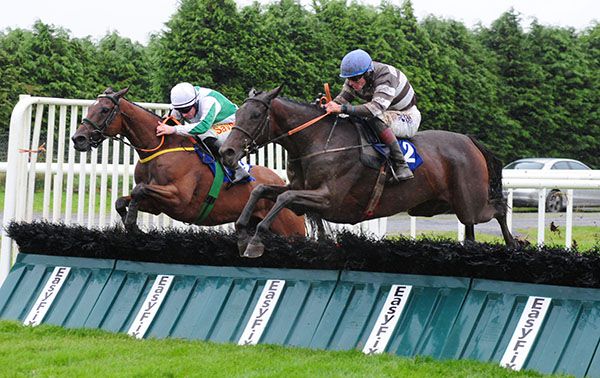 Well Set Up, near side, collars Lill Smith at the final flight
© Photo Healy Racing

Well Set Up availed of a drop in class to take the mares' maiden hurdle in Roscommon.

The 4/6 favourite was driven to chase down Lill Smith after the penultimate flight and picked her off at the last.

She stretched clear under Ricky Doyle in the final 150 yards to win by two and a half lengths.

Lill Smith took second at 11/2 and she was a length and three quarters ahead of Bay Ambition (33/1).

Trainer Mark Fahey said: "Ricky gave her a good ride. She always hits a flat spot and he nursed her through it.

“Two miles isn't her ideal trip but it's a nice place to start off.

“There is a novice hurdle and also a mares hurdle in Limerick in a couple of weeks time. We'll have a look at those and see how she is.

“She loves that ground.”

Well Set Up had finished second in a Grade 3 mares' novice hurdle when last seen over two miles six at Limerick in March - beaten a nose by Robin De Carlow.

Nickajack Cave to head down under

Nickajack Cave has run his last race for Ger Lyons and will join Peter Moody in Australia with the Melbourne Cup as his target.

Phoenix Thoroughbreds are to withdraw from racing in the UK with immediate effect.

Franconia will head to France this weekend for the Prix Minerve at Deauville.

Owen Burrows is leaning towards pitching Tabdeed into Group One company for the first time in his career in the Betfair Sprint Cup at Haydock.