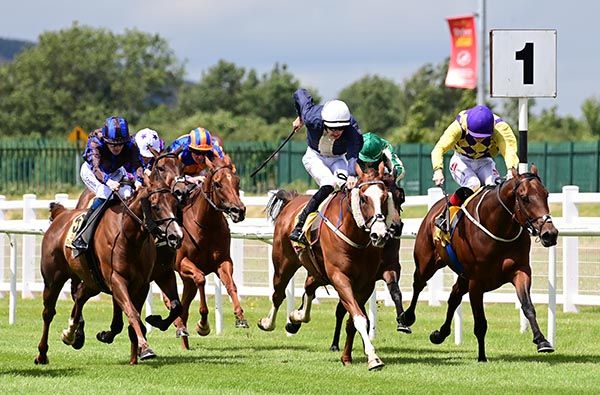 In a race of changing fortunes, Ken Condon's Teresa Mendoza was played fast and late to land the Listed Dubai Duty Free Dash Stakes at the Curragh. Measure Of Magic in the first-time visor, absolutely blazed a trail from the stalls in this speed fest over six furlongs. She was soon nicely clear and still held a healthy advantage past halfway.

The petrol gauge flashed red with a quarter of a mile to go, though, as strong-travelling Power Under Me closed on her. At this stage Teresa Mendoza was last of the 10 runners but still travelled within herself.

Power Under Me was shaken up by Colin Keane to claim Measure Of Magic racing to the final furlong, but was swiftly closed upon by the big white face of Prisoner's Dilemma

They stormed into the final furlong and Prisoner's Dilemma got in head in front with 150 yards to go, however, he wasn't home yet.

A confident Billy Lee on Teresa Mendoza cut through the field to get on the heels of the leaders inside the final furlong.

She soon burst through between Prisoner's Dilemma and Beautiful Sunshine on her outer to get up close home by half a length.

Last year's runner-up brought up plenty of bets as she was backed in from 7/1 to 4/1. Runner-up Prisoner's Dilemma certainly outran his odds of 18/1 and was half a length in front of 15/8 favourite Power Under Me.

Lee said: “I took a chance and took my time as they went fast. They came back to me and I was able to sit longer than I usually do.

“She had been running well in Listed races and one of them was going to fall her away eventually.”