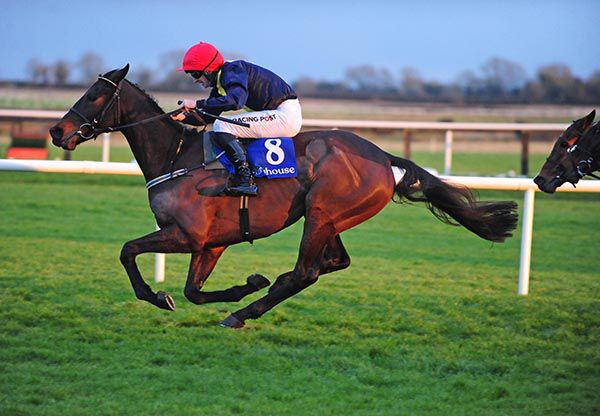 By the Monson horse, Aizavoski, like yesterday’s winner, Hes A Hardy Bloke, Whatdeawant, a half-brother to Hardline, won the concluding Jump Into January @fairyhouse (Pro/Am) INH Flat Race in the style of a very smart performer.

For Willie and Patrick Mullins and the Mulryans, Whatdeawant had the better turn of pace up the straight to beat Ginto by two and a half lengths.

For the Champion Bumper Paddy Power go 33/1 first show about Whatdeawant and 33/1 from 20s on Ginto.

“It was a nice performance and nice to have a winner for Bernardine and Sean Mulryan,” said Willie Mullins.

“He looks smarter on the racetrack than he does at home, that'll do me.

“I'd imagine he'll go for a winners or we could go straight to Cheltenham with him. Patrick was very happy with his performance.”

Meanwhile on dual Gold Cup hero Al Boum Photo the Closutton maestro said: “He seems great after his run (at Tramore on Friday).

“I think the longer break, with not going to Punchestown, he was a bit more ring rusty than we expected.

“The first two miles of the race was run at two mile pace with Djingle cutting out a fast pace.

“When we put it all together I was much happier when I analysed it at home than I was leaving the racetrack.

“He didn't stop going through the line. He just idled mid-race when he had no company around him. Danny was way ahead on Acapella Bourgeois.

“He just idled but once he got close to him around the home-turn, to beat a 150 horse 19 lengths could be as good as any performance over Christmas.”